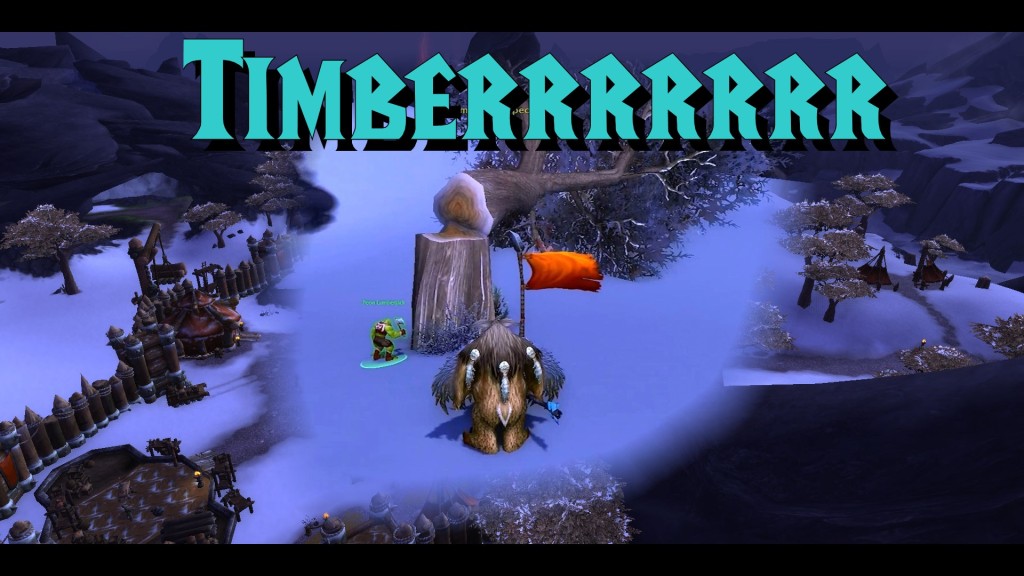 Whilst exploring the Alpha testing of Warlords of Draenor, I found myself amazed by many things. What I found on my initial play-through of the new Garrison feature, was a living, almost breathing world.

To clarify, the preliminary questing structure of the Horde and Alliance zones; Shadowmoon Valley and Frostfire Ridge, task you with the creation of a forward base of operations for your faction, hence ‘Garrisons’.

What I didn’t expect to find was the process to create such a structure to be so unique and ultimately groundbreaking for the genre. The world around me is covered in snow, with thick blasts of icy air flowing across the ice plain in front of my character, signified by a new visual effect representing an accurate depiction of snow-drift we find in real life in the Arctic Circle. In the distance, large obsidian-like mountains stretch up to the heavens. Closer to my character, the area where I stood, was surrounded by the same black spikes of rock, affirming its hostile, raw nature.

The plan was simple, each quest tasked me with a laundry list of potential hazards and menial operations. These would need to be completed to ensure safety for the lore figures that had given me these orders, and those of the Horde army, of which I was now actually in charge of as ‘commander’ of the Horde.

Firstly the area was covered in various nasties that could pose a threat to any building operations, and since we had our experience with dealing with beasts of all types by now in the game, we were to cut them down. Until now, this is your basic list of quests, kill this thing, kill this big named thing and so on. Expecting the obligatory ‘collection’ quest as I approached the next yellow exclamation mark, and I right clicked on the lore figure. Yes, it was in fact another collection quest, but not exactly what I had envisioned but I wont spoil it for the purpose of this article. It seems that now, with the new title of “commander”, it was up to me to place markers on various trees in the surrounding area of the camp. The trees would then be cut down by peons, peons that were effectively under my control. The idea that Blizzard had realized I had slain the mightiest of foes, lords of pure death, old gods, and so on and had finally come to the conclusion, I should perhaps not be in charge of collecting the lumber myself made me actually smile, stand up and salute in awe.

Is  this the reason that I’m writing this article? No. You see the process in which the peon cuts down the trees, now that’s the reason for an article.

Around the area of the ‘camp’ stand around 60 trees, give or take. Around 30 of these have icons next to them, signifying I can place a flag next to the tree and watch as a peon walks up to it, cuts it into lumber he can handle, then carries it back to the camp and the quest givers. Then it hit me, each one of these trees didn’t need to be cut, and I needed only 8 to be marked, with each one that I didn’t cut down having a chance to survive. I thought to myself how cool it would be if these trees stayed cut down, and how more immersive the experience could be, that was until after handing in my quests, and realising that, despite my own doubts, the trees I had cut remained stumps and those I left alone still stood proud. Not cut down in some awkward cut scene, but still there, standing proud like a massive middle finger to my doubts of the technology of what is a game aging over 10 years since its release!

It is safe to say, the following gasp of air and explicative’s made me rush straight onto Adobe to make a video on what id seen. To share this feeling with the world, in the very much the same way as I would of if I had managed to get a shiny Pokémon card in a booster pack when I was five with my neighborhood. The feeling of elation seeing the changes so far in the Warlords of Draenor Alpha, and now Beta testing phases have re-invigorated my belief that Blizzard still reign supreme in innovation and perfection when it comes to the worlds they create.

Sure another game my create better looking worlds, or the finest graphical overhaul that requires £800 graphics cards to enjoy. But at the end of the day, Blizzard can create a more enjoyable, immersive world, with minor tweaks and adjustments, and STILL have their content playable on 5 year old equipment. What video game company can still say that?

It’s truly phenomenal, and the attention to detail and undoubted love they have for the World of Warcraft is shown triple over in all the media they involve themselves within. The books are fantastic, written by amazingly detailed and passionate authors such as Christie Golden, or beautiful models and toys crafted with the same interest and passion as the games they are based upon. All of this is paramount in the success of a franchise, despite the enormous budget they have to play around with for all aspects of the company; Blizzard cannot be confronted with the frankly boring and disturbing lack of consumer service and belief in their own worlds over just monetary concerns. If there ever needed to be a restorer of faith in the Warcraft universe, Warlords of Draenor is sure to be that exact reason you need. Just watch any of our videos or read any of these articles on WoW Stratics, if you don’t feel impressed after then, Im not sure you can call yourself a gamer anymore!

Here’s a video of my first encounters with Frostfire ridge, Shadowmoon Valley and a little overview of Garrison controls and the development of this player housing type structure. We upload many videos on Warlords of Draenor over at Acegamestv, drop by and say hello! Enjoy!