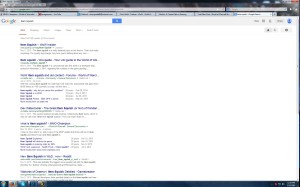 Look how many others don’t know!

Recently it has come to my attention that this topic was not a clear one, and that there were multiple levels of misunderstanding over it. Many people simply don’t understand the term, while many others don’t recognize what is actually happening. Then, of course, there are people who aren’t even aware this is a feature in the upcoming expansion! So for those of you who are in any of these situations, don’t fret as all your answers will be divulged!

Before we start, its important to understand what has happened in MoP. Coming off Cataclysm and Dragon soul, we had an ilvl of low 400’s common between 85-90. Let’s break down the ilvl comparison from start to finish of MoP, as its important to use as a gauge for why this is happening.

Long story short, we see the immense jump from the start of the expansion to the end, spanning nearly 200 ilvl from leveling gear to the pinnacle of Raiding gear. This is because of the introduction of LFR and Flex, as well as the “Thunderforged” concept as well as the valor upgrades. With this much variation, its no surprise we see an astronomical stat jump as well. Examine the two images below of my Paladin. 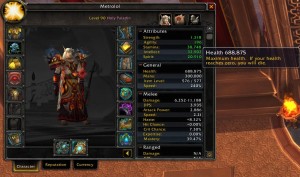 The highlight on these images is that fact that, when comparing the two item levels, you will see I have less than HALF the health and stats! Whenever you travel that far in one expansion, obviously things are going to get out of control!

So now that we understand that, we are on the same page about WHY the item squish needs to happen. But you may still be wondering what exactly its going to do?

In theory, the concept revolves around bringing stats on items down about 10 fold. The point of doing so is to keep bloated numbers away from the game like the 1.5million burst we see from Syiler’s Enhancement Shaman. Numbers like that just don’t feel fun or realistic, but also flat out don’t operate well. In a game with potentially billions of data are being processed per second, the higher the number the more the game has to work. So its a 50-50 mix of functionality and cosmetic improvement.

Most players would agree that the smaller the number the better, and of course, the less 6 billion crits we have the smoother the game will run. If you haven’t been around raiding in MoP you have missed some pretty brutal lag on the pull, as everything is rolling in from the hundreds of pets and other sources. Unfortunately, this has lead to unnecessary changes having to be made just to actually be able to play the game in these situations. By keeping the numbers in line via Squish, we assure that there is no client or server side complications and any lag is solely on the person playing – which also should be minimized with these smaller numbers!

A big concern most people have is how it will effect the early game and leveling, as well as soloing older content. Blizzard has assured us that the amount of time it takes to kill something now will remain constant, despite the large difference in numbers. To understand this, you must understand that everything is effected logarithmically. There will be a fixed curve that will be followed for all content that has simply been extrapolated upon as things are now. It may seem difficult to understand, but all they are doing is reducing everything 10 fold, as easy as it gets mathematically. They will follow this curve down to the lowest number until it is no longer significant, so perhaps early levels may see some abnormalities, but everything with at least some normal-sized health pool should be easily converted.

The final thing to understand is that this is very much a “feature” of this expansion. This is the first time World of Warcraft has done this, and is a very important step in ensuring the longevity of the game. On top of this, it has also been stated that this will not be the only instance we see of the Item Squish. They intend to reexamine the situation every time its needed, allowing them to continue the big gaps in item level that are required with 4+ difficulties, yet keep us from doing one point twelve trillion dps unbuffed!

The “Item Squish” is a concept being employed in the 6.0 patch prior to Warlords of Draenor’s launch that will reduce the stats of everything in the game by about 1/10. Despite this, Blizzard assures us that no content will be any more difficult or easy, as its simply a matter of dividing by a fixed number across the current inflation trend. As long as the trend is predictable, the squish will be as well.

This process was deemed necessary after seeing the rapid exponential rise of all numbers through Cataclysm and Mists of Pandaria. It will be performed in order to preserve the respectability of the game’s stat and DPS correlation, but also to help minimize technical complications derived from massive numbers happening thousands of times a second. No one wants to see 1 million DPS being the norm, and even less people want to experience the lag that is inevitable when having a 10 year old client communicating trillions of digits a second to a server system, all while 25 people spam a multitude of spell effects.

As we aren’t even in beta yet, we can only speculate on the specifics, but hopefully you now at least have an understanding of the theory the subject contains. Stay tuned to WoW Stratics for more information and full coverage of everything coming with Warlords of Draenor!

Inside the Item Squish – Comparisons, Math, and Stats!