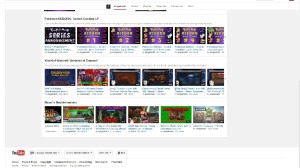 As some of you may be aware, I make the occasional video over on youtube.com/acegamestv, and on certain occasions I get the urge to express my thoughts and opinions from my time playing and working around the World of Warcraft community. Usually I do this through the means of Machinimation, or my terrible version of that term in any regard.

I have found myself eagerly awaiting the ability to access the new models brought by the Warlords of Draenor expansion, yet I feel daunted by the prospect of recent changes to how the file system will be organised with the new expansion, because before long it will be changed for ever, but what is it changing too? and why?!

The ‘CASC’ system or ‘Content Addressable Storage Container’ is essentially what it says on the tin, a storage system. How it differs from current WoW; which uses the ‘MPQ’ format, is that ‘CASC’ essentially allows for better file organisation and reduced need for future game patches to neither be as large nor take as long to apply as the current system. This all sounds wonderfully exciting I know, yet it has some underlying issues with the current accessibility of manipulating those models in a sandbox-like state; such as ‘WoW Machinima Studio’, or even ‘Model Viewer’.

Currently a budding film-maker / ‘Machinimator’ need only to film the content by layers through a model viewer and then add subsequent layers for other elements additional to the character; such as location, props, etc. This method has been used by ALL the most advanced Machinimation out there and provides a virtually endless amount of creative room. This change of file type then is surely a temporary situation? Well from the sounds of it, the file type and the method of organisation makes it particularly difficult for a program to access the areas it would need for a similar process to be possible.

Currently ‘CASC’ models are being shown on certain fan sites own online ‘model viewers’; such as WoWHead.com’s own, however those models have been converted back to MPQ from CASC using a fairly complex and time consuming process, then hosted on the site as a rendered mesh. This is not something you could access independently for Machinimation and this is mainly why I first feared the news of change.

In the past with the current and older models, I record a character model transparent or against a green screen on model viewer and export the video onto a pre-recorded scene within the actual game in my editing suite, then I applied the various scenes and added vocals and a audio bed in post much later, but more recently I was able to gain access to the Warlords of Draenor Alpha Sandbox though means I will not explain.

Within the WoD alpha sandbox, I recorded footage of a freshly created character to create a very basic video with emote animations, which I couldn’t believe how good it looked for what it was, despite the model itself being practically naked and without any items or equipment present, with The quality of the models and animations attached to those meshes fantastic. If you remember back to the recent trailer that Blizzard Entertainment brought out with the Gnome using the new LvL 90 Boost service, you will remember that the new Gnome model and animations were used. The video was almost breathtaking to someone like me. The very idea that those animations could look as realistic and smooth in transition as they did is truly mind-blowing. I really want to be able to make my own videos with this technology as soon as possible, but will ‘CASC’ make that impossible?

‘CASC’ isn’t just being implemented to make the patching time shorter, but a quantity of other benefits. The first major benefit is that the system will maintain a constant build, and upon detecting a fault or corruption, the automated service will simply re-download those broken parts immediately in the background. This is also a great way of preventing modified files being used in game, such as exploitative injection processes, or botting technology. Exploitative aspects of the gaming industry are ever present and to me it feels like this is an in-direct assault on that front without really understanding the implications to legitimate ventures through the game files.

The process for re-packing WoW files as MPQ’s and essentially reverse-engineering is something that currently has been possible to the extent of emulating private WoD Alpha servers, I of course will not give links to such sites where you can obtain such a program, yet those responsible for that effort used a conversion method to re-host the files in the old methods used for MPQ emulation. The short of it is that there will be programs in the future that will allow for Machinimation to use the next gen models and environments, but for now you will be limited to in-game filming for quite some time whilst programs are literally re-written by developers and then openly hosted for the general public (something that usually is not for free).

The point to address here more than anything is that Blizzard Entertainment award Machinimation in contests each year they host Blizzcon and other events online, so why not create a sandbox model viewer of their own? Surely it would prevent people from so frequently exploring potentially ToS breaking activities and other frowned upon methods to get the shots that are needed for a particular scene. It would both make Machinimation and fan-art more accessible for more people, and ease the minds of those who wish to remain un-banned from the videogame itself that do already make these videos.

The community of World of Warcraft is enormous and the creations of individuals world wide always never fails to impress me, others I know who do not play the game still check fan sites weekly to look at the artwork people have created for the game. If ever there was to be a community that deserved official assistance in this matter, World of Warcraft is certainly the most ideal.

Premade Group Browser – Death of Many to Help No One?