In this weeks Friday Feature, Principal lead systems designer Damion Schubert takes us through the design philosophy of The Old Republics Codex system and introduces us to the concept of Datacrons

He also receives bonus points for the use of the phrase ‘OMGPWN3D go bring back 3 friends in epics!’

There are clearly many games that have deep, engaging back stories that designers and writers have worked tirelessly to develop, but in the game, the player only sees what their character sees. Often times, the rich back story is used only for the context of quests, and players never really get the bird’s eye view of the narrative. The ‘big picture’ can become even more confusing and incomplete if the player misses a quest or discovers key plot points out of order. A lot of times, what ends up happening, is that the player just gives up on understanding the overarching storyline, and just focuses on enjoying other parts of the gameplay experience.

Obviously, this was a matter of some concern to us. Star Wars™ is one of the richest, most engaging fictional settings in all of pop culture. We have an exceptional team of writers working hard to build and expand the Star Wars universe in the Old Republic era. As you may have heard, story is kind of a big deal to BioWare and to The Old Republic™, and that story is a lot better if you understand the context for what’s going on around you and how your actions fit in.
The Genesis of the Codex

When we encounter design problems in The Old Republic, we like to first look at other BioWare games for a solution. In this case, we really appreciated the codex used in Dragon Age, which allows players to collect pieces of the story that eventually coalesce into a collected whole. We also looked at the codex in Mass Effect. The focus was slightly different, instead providing an encyclopedic view of the universe as a whole.

For The Old Republic, we took the best of both systems, using our codex to not only elaborate on the settings you fight in and the creatures you kill, but also to plant seeds of knowledge relating to key personages and concepts from your class story and long-lost lore meant to give more feedback at large. We sketched out what we wanted, and told the writers to get to work.

How much work? Current estimates of our codex are around 120,000 words of text. By comparison, the average Star Wars novel comes in at around 100,000 words. 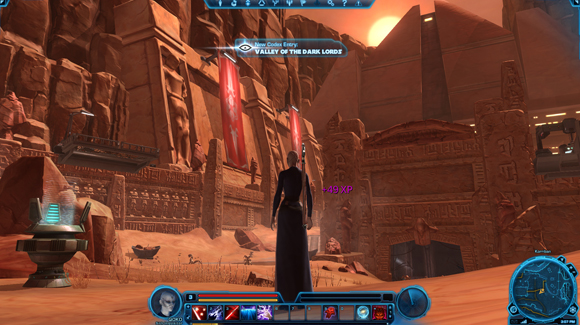 The Mechanics of Discovery

This feature isn’t just about being another way to deliver story to the player. As Lead Systems Designer, I’m mostly concerned about bringing the fun. Delivering story and context isn’t enough for me – I also want to be sure that we add new activities for players to do and goals for him to achieve. In particular, we saw the codex as a way to reward exploration

Long-time players of MMOs are probably, on some level, familiar with the work of Richard Bartle. He wrote what is considered a seminal work on MMO design, describing the types of players that play in virtual worlds (wondering what sort of player you are? Take one of the many Bartle’s tests out on the web and find out). He divided up the player base into killers, achievers, socializers and explorers, allowing for the fact that most players are actually some mixture of the categories. He posited that, in truth, games needed to appeal to all four quadrants to be successful. Building off his work—we see the codex as a way to enhance the gameplay for explorers.

We give away some codex entries for free. For example, we think that it’s important that players have basic background about the locations they are visiting, and key people in their class story arcs will almost always merit a codex entry. For the rest, though, we want people to explore the planets a little more, and take on some challenges a little ways off the beaten path.

Wandering to distant locations on the map will unlock codex entries about those far flung corners of the globe. Unlocking the codex entry for the k’lor’slug, for example, involves killing a hard to find, tougher k’lor’slug deep in one of Korriban’s tombs. Additionally, exploring the artifacts in the Academy’s library can reveal ancient bits of lost lore, and doing quests for various alien species can unlock their entry in the codex.

Currently, none of these are locked behind a serious challenge – our codex unlocking k’lor’slug is a challenge for its level, to be sure, but not a ‘OMGPWN3D go bring back 3 friends in epics!’ challenge – and that’s intentional. Explorer gameplay should, first and foremost, reward exploring. 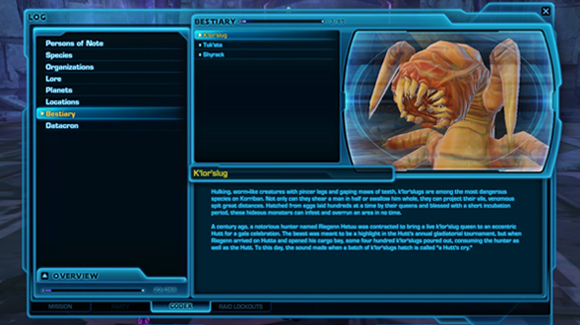 That’s not to say that some codex entries shouldn’t be challenging. Quite the opposite, we want some codex entries to be worthy challenges – but we want those challenges to be centered on exploration. Enter the datacrons. In-game datacrons will be a sub-set of the codex entries. The world builders had been kicking around the idea of these little world gizmos for a while now. These unique objects are placed throughout the world for the player to find, usually in hard to reach places. If you successfully reach one and interact with it, one of your stats will be increased — permanently. The codex gave us a way to increase the visibility of these devices, and offer a player an easy way to track his progress finding them.

While most codex entries can be obtained with the players stretching their legs (searching the whole map, killing obvious targets you don’t normally need to kill), finding datacrons typically requires a little extra exploration and a even little ingenuity. While some are hidden, many are in plain sight – the trick is often in figuring out how to get to that datacron that you see on a ledge off in the distance.

The inspiration for datacrons comes from a similar game mechanic in one of my earlier projects. These items spawn in predictable locations, but are only usable by each character once. Over time, the locations of these become known, and shared lore. In this other project, the unique nature of finding these items resulted in an interesting social dynamic, where intrepid explorers, eager to prove their world mastery, organized hunting parties for groups of new players to explore these worlds and find these hidden nooks and crannies. We would not be surprised to see a similar pattern emerge in The Old Republic.

All of these features combine to make a nice little collection game for the player, where the reward for the act of collecting is more lore and context offering insights and depth into the world of Star Wars: The Old Republic. In the codex user interface, players can not only see the entries they’ve discovered so far, but also the progress they’ve made towards finding all there is to find on a planet or in a category.

Overall, the codex system has been successful at meeting our two design goals of providing more fictional context to the player, and providing an explorer mini-game with meaningful rewards. One nice thing about the system is that it’s also designed to be easily expandable – an important consideration when building a game likely to have a long lifespan through patches and expansions. We expect the codex to become continually richer and more involved throughout the life of Star Wars: The Old Republic. 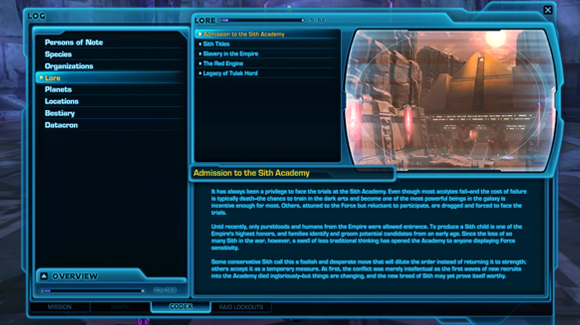 Warhammer Online: LET’S DO THIS!