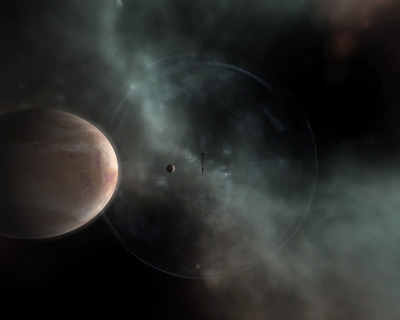 POS or Player Owned Starbases have long been a staple of life in Eve Online.  Their uses have ranged from being quickly dropped field bases for invading forces to be industrial complexes building the massive Titans and Supercarriers that now dominate Eve itself.  Establishing a POS has never been an easy task, and if you wanted one to stay any length of time, this required a considerable amount of logistical support to both calculate and acquire the fuel to keep it running and doing its business.

That complicated system looks like it may become much, much simpler, at least for the end user.

As per this devblog: http://www.eveonline.com/devblog.asp?a=blog&nbid=3029 we may be seeing the following on the Singularity soon.

Part one of the Devblog concerns a minor change to jump bridges:

Currently on TQ you can use a jump bridge if a) the tower is configured to not shoot at you and b) you have the forcefield password entered.

a) is a pretty straightforward way of configuring access, and we’re pretty happy with it.

b) is awkward to use and requires people to keep track of a bajillion passwords and/or hand out their tower passwords to the entire universe.

We don’t like b), so we’ve removed it, and you’ll no longer need the starbase’s password to use its jump bridge. Everything else will continue to work as it currently does.

This is a fairly nice change in my opinion for two reasons.  One, it was a pain to travel from system to system to system having to remember passwords for each jumpbridge.  Two, and this is a bit more evil, I predict a lot more people will get stuck on jumpbridges for the simple fact that when you make something easier to use, more people will use it.. meaning that these bridges will need to be fueled more often, and putting pressure on larger alliances to keep them maintained.  You might also see Liquid Ozone prices slowly go up with this news.

Part two of the Devblog concerns setup and takedown timers:

The current timers for anchoring, onlining, offlining and unanchoring structures are suboptimal from a player-experience perspective, so we optimized them.

Here are some fun changes:

In the days where capital ships were rare and supercaps were non-existant, it made sense to have the long timers because it gave your enemies a fair shot at destroying your POS before it was established.  Nowadays, however, everyone and their uncle has a supercap in their back pocket and the ability to quickly establish yourself has become paramount.  It will be interesting to see if any new tactics develop with these changes, particularly the new online/offline aspects to Turrets, Missile Launchers, Hardeners and EW batteries.

The Devblog finally gets to the meat of the issue, one that I know I heard a lot of groaning over, in part three.. Fuel

We’re concerned that asking people to regularly fuel more than two or three starbases is probably in violation of the Geneva Convention, so we decided to make it a little easier before we’re indicted for war crimes.

Starbases will stop needing multiple fuel types, and instead will simply use fuel blocks, each of which contains 100% of the Recommended Hourly Allowance for a small control tower. (NOTE: none of this affects charters, which will still need to be added as normal!)

The four racial fuel blocks will be built in batches of four in all stations, plus starbase ammo assembly arrays (blueprints coming to a Thukker Mix station near you; build time approximately ten minutes). Each batch of four will need the following components:

Towers will use 1 block/hour for small, 2 blocks/hour for medium and 4 blocks/hour for large. The CPU and Power load will no longer have any impact on your fuel needs – all towers now need the same amount of fuel, regardless of configuration.

Blocks will be 50m3 each. To make fuel bay sizes line up more nicely, we’ve boosted the bays on normal towers to 35/70/140k, so you get a nice round 700 cycles in each, which works out at a hair over 29 days. (Does not affect strontium bays!)

The one downside of this big-blocks approach is that it’s impossible to give faction towers a fuel consumption bonus any more (you can’t consume 2/3 of a block). We talked to some large-scale starbase operators about this, and they told us that the main bonus of faction towers for them is actually that they last longer between fuel cycles. To try and compensate for the increased running costs, we’ve taken the above bay size increases and added +25% bay size on top of that for the “tier 1” faction towers, and +50% bay size for the “tier 2” ones. We’re hoping people will find that a satisfactory tradeoff, but we’re listening for further feedback on this change.

The way we’re going to roll this out is that the blocks, their blueprints and the changes to tower capacities will be introduced in the main patch. The changes to fuel consumption on the towers will be rolled out a couple of weeks later. The starbase system doesn’t allow for multiple simultaneous fuel types, so we have to switch from one to the other during downtime.

The way we’re strongly advising players to approach this handover is to fill your fuel bays with “half and half” – enough of the old fuel to last you to the changeover downtime and then some (I’d suggest 2-3 days extra just in case something horrible happens), and enough of the new fuel blocks to run the tower until you can fill it with 100% blocks. The server should then come back up after the update, see the new fuel and start consuming that like nothing had happened.

These changes will certainly improve the logistics of fueling towers, as well as spur another minor market for building these fuel blocks.  More time not moving fuel around will certainly be better.  I personally think that the size of each fuel block is too big.. at 50m3 per a typical load (estimating around 20,000m3) would only give a small tower around 15 to 16 days of functionality.  I think that having the fuel block at 25m3 would be great because a full month’s fuel for a small tower could fit in a large industrial with a well trained pilot.  I’m not much of an industrialist, so my thoughts are likely a non-issue.  However, as noted in the devblog, they are still reviewing these changes and we might see some changes before this goes live.

Go to school in Eve Online? WHY?!

Navy Omen versus Zealot – Which should you choose?