★ Blog Banter #34: The Rise of the Spaceship Politicians ★

Please join us in the next installment of the Blog Banter! 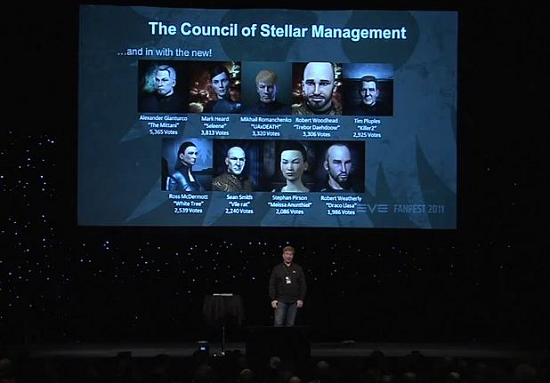 The polls have just opened for the election of candidates to occupy the 14 seats on the 7th Council of Stellar Management. To kick-start a topical CSM-themed banter, CCP Xhagen – fierce champion of freedom of speech and in his words, “the guy that gets yelled at when the CSM dudes do booboos” – has offered this question:
“How would you like to see the CSM grow, both in terms of player interaction and CCP interaction?”
Banter on.

So, this blog banter is about something that I’ve had quite the experience with – representing other people. I started doing that in 1998 in an unofficial capacity, later on when I started gaming I spent a few years doing it for another gaming company; SOE.

In New Eden, our constituents has the power to exclusively vote for who they want. Its not guaranteed that they’ll get in so in the end some votes are lost, but that is the case of democracy. You don’t allways get the people to represent you that you had hoped for, and there is nothing wrong with that.

What is important though, is that the people who then are elected does that job, and does it well even if you didn’t vote for them. Thats the case of real life politicians and for the case of the spaceship politicians of New Eden the situation is no different. Granted, this is a game – and the only say you have can affect peoples enjoyment of their spare time.

So, how do you accomplish that? You get a wide array of different people into the CSM so that the entire pool of electees cover as many aspects of the game as there are playstyles. The option to do that is up to the constituents. It is their task to produce a pool of candidates that in total cover many aspects. Thats why pitching all your eggs into one basket is a horrible idea. Sure you propably want that guy that knows his shit in, but if everyone voted for that person you’d not really get as broad spectred a CSM as you really need. To that effect, the tools to seperate different aspects of the game is really only up to the people running.

Crowdsourcing comes in handy, but there are things that are more important than coming up with excellent ways to poll your constituents. If youre unable to get the opportunity to present those crowdsourcing results, all the polling in the world doesn’t matter.

Thats why I spent time going crossing the Atlantic Ocean on my own accord back in 2010 and attend a Fan Fest. To make sure that the crowdsourcing I had done personally was heard, not only by the players but also by the guys that could make those issues go away. Not the devs. The Producer that allotted the developer resources. The guy in charge.

You may think that it should suffice with internet relayed communication. I can tell you right off the bat that is not the case. What matters is Face Time, and plenty of it.

As a player rep (the equivalent of a CSM) I had my fair share of face time with players in Las Vegas back then, and while it was highly usefull I didn’t really get much new feedback from players that I wasn’t allready aware of. The most results I got was from the late nite beer bongs with developers, pondering a variety of problems that pops up in the minds of players. Discussing options and ping-ponging solutions. Presenting facts, numbers and realying frustrations. It was fun, and it was highly effective. For the following 3 months, the list I presented was worked on vigorously. Not all got sorted before my departure, but the major culprits did get handled and I could tell that it made a huge difference for thousands of players, back then. I had the inbox to prove it.

There is noone that can force those changes to happen though, and nothing can force a developer to pay attention to a tool. It will blow over and the issues presented by a socially inept person will be dismissed. If you can’t effectively communicate on behalf of the players and aren’t able to get Face Time, you’ll be ineffective.

For the CSM to grow, players need a way to filter out these personalities that aren’t in it for the work, but to polish their own internet fame. They need to filter out socially inept persons and they need to filter those out prior to the election. For more player interaction, the CSM should be provided with the opportunity to attend the Player Gatherings in their local area so their local constituents can get their own Face Time with them.

CCP allready provides the CSM with ample opportunities for them to get developer Face Time, so that isn’t really a concern for the players. That part is allready covered so continue doing that! What differs an effective CSM from an ineffective one is the ability to make yourself be heard. Its not a democracy. If you are unable to effectively communicate, someone else will take over and speak on behalf of their constituents; sometimes invalidating the point your constituents want you to make on their behalf. Its not a democracy. If the problem is big enough and the solution presented is viable it doesn’t matter how many are against on the CSM. Devs chose the best solutions from their perspective; not yours – so its important to come up with alternatives as well.

Players need to find a way to vote for the influential people. But how does someone that has had a few weeks or months in the game determine that?

CSM candidates propably could come up with some form of transparency in communication that allowed them to prove to the players that they’ve previously been effective, pursuasive or influential. For former CSM members this should be easy but for new applicants – one could effectively draw on Real Life experiences. Have you been a member of a board? Perhaps youre a public speaker on some level? Whatever it may be, players want effective reps. Should we expect any less then excellence in communication?

While this is not an endorcement post; a CSM member said some things that are very true in this regard some time ago:

Even communicating with the upper management is a toughie. We get access during the summits, but if they don’t interact with our persistent skype channel then we either get access through the lower ranking devs or we bring attention to the issue through other arenas. Winning the PR battle goes a long way to bringing attention to an issue especially if we’re able to work the narrative into a player friendly sound bite.

When it comes to the future of this game, we will do everything necessary to see it saved.

I guess this plays well into the experience I’ve had that people will take the shortest road possible. Present a dev with a wall of text and he’ll choke on it and take something less demanding. Present the same wall of text in a condensed format and you’ll see other results. Sound files are propably even better because they don’t have to actually  read and you can focus on communicating the issue correctly.

Communication is everything. As long as CCP higher-uppers keep away from their minions and keep sitting on their pedistals only to pass on their “awesome” ideas – it will only create further frustrations. Incarna was a direct result of such behavior and we shouldn’t endorse it. I’ve had my fair share of Community Relations people I’ve had to work around rather than through because they just drowned the issues I passed on. Sometimes identifying the people that does that, and affiliating with alternate people can actually solve more problems than it creates working around the usual channels. Sure, it does take a bit longer – but the end goal justifies the means.

So, go vote! Make your voice be heard, so that others may die in a great ball of fire 🙂

First blog posts are so predictable, aren’t they?