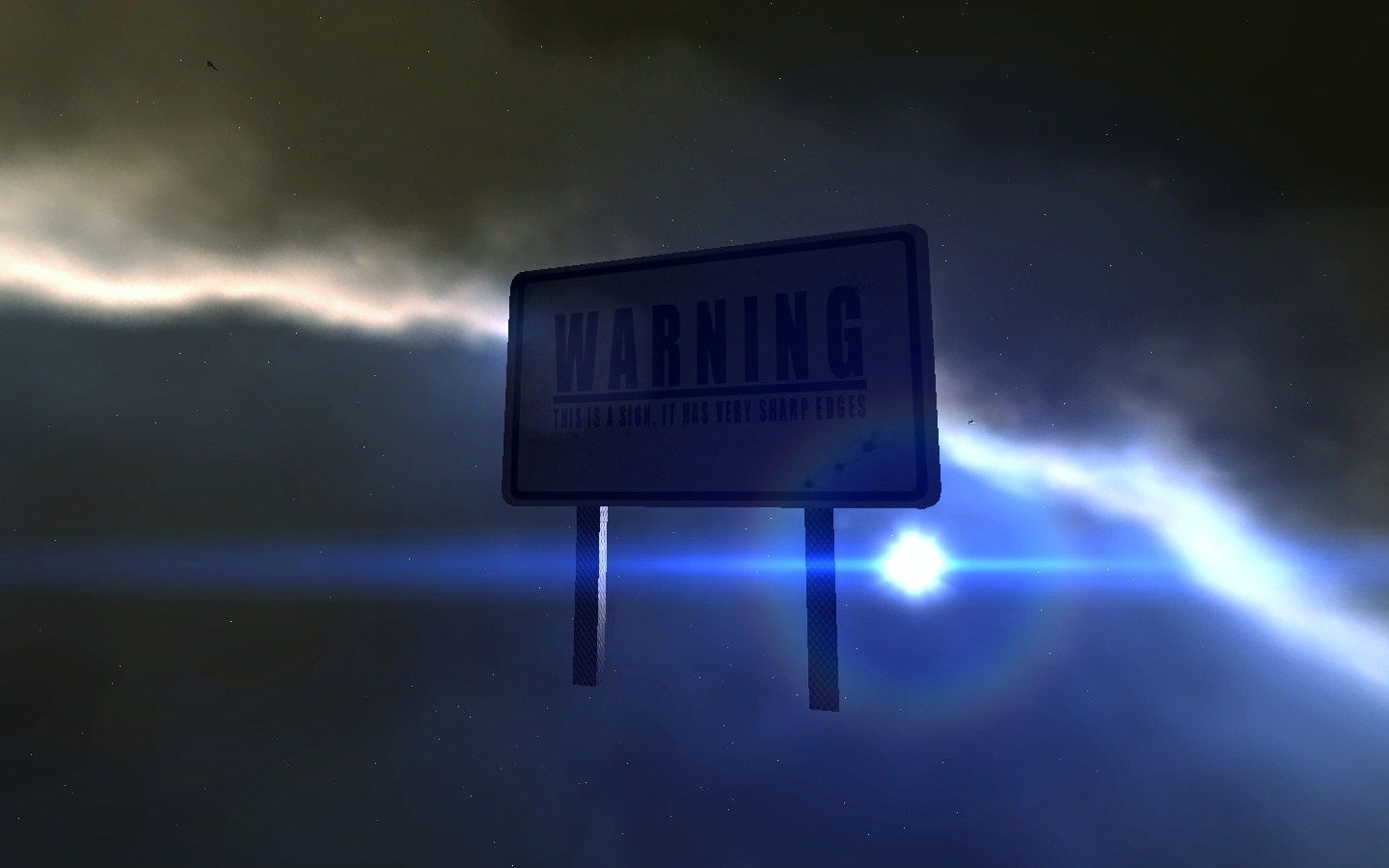 Blog Banter 36: The Expansion of EVE

“With the Inferno expansion upon us, new seeds have been planted in the ongoing evolution of EVE Online. With every expansion comes new trials and challenges, game-changing mechanics and fresh ideas. After nine years and seventeen expansions, EVE has grown far more than most other MMOGs can hope for. Which expansions have brought the highs and lows, which have been the best and the worst for EVE Online?”

There is a difference between having a personal opinion about which expansion is best, to the outlook of a portal; like EVE Stratics undeniably is.

Since the rest of the bloggers will most likely cover personal opinions, I’ll leave mine here (Apocrypha) and move straight on to the opinion of Stratics as a portal.

With the weight on community, here’s the path that led us here:

2003 brought forth a focus on player run corporations. Tools to communicate with was required and gave birth to a lot of ingame assets that we still use to this day; EVE Mail, Chat Channels with customization options, but most importantly the ability to group with other likeminded people. Perhaps the most important part of EVE Online remains to this day largely unchanged with the exception of further enhancements to this featur. It also gave birth to the player driven economy.

Metagaming and the political climate wasn’t really possible or perhaps even nessisary untill this expansion which introduced Player Owned Conquerable Stations. In some sense of the word, it may be the reason we have metagaming, although it has as much to do with psychological warfare as anything. This was the baby step into that field.

As you’ve no doubt spotted, the props are that community driven is the key here. Community created content in terms of facemelting sessions wasn’t really that nessisary till Castor and Exodus. Thats because Stratics focuses on community.

In a perfect world, there would be no conflict. However, EVE isn’t perfect and this is a world where conflict is the motor of all things shiny. It is the fuel that drives the player driven economy. It is the proteins, carbs and fibers of the community driven facemelting sessions. If you do not die regularly, other people must. Exodus gave us better corporation security of assets, but also Alliances and war decs. Things that improved the metagame. For Facemelting; wings and squads and gave us a new profession in EVE that we really allready had – the Fleet Commander. Real people that gave orders to several, sometimes more than hundreds of guys with thousands of guns so that they could fight – over their Starbases.

It is shortly after that CCP realizes the potential of viral marketing, and the power of having a creative playerbase with video aspirations. Video’s are employed as part of psychological warfare tactics for the first time.

Tweaks to the structures grinding. However, with Sovereignity added you now had a reason to engage larger fleets that flew under the same banner. The first steps were taken towards Coalitions if they didn’t really already exist. Because structure grinding was so boring, and logistics required to maintain starbases – the first capital ships saw the light of day.

More corporation customization, but more importantly the first step to a unicode platform to support all languages in the known ‘verse. Propably the biggest step to including a more globalized playerbase without it really affecting the day-to-day operations of a capsuleer. In the long run though, thousands more targets in space, ensuring a continued growth of the playerbase. Bold move, but a visionary one. Well done CCP.

The addition of more carriers, motherships and titans meant that the metagame also had more tools too use for player domination and psychological warfare. Breaking other peoples game because it meant easier access to sovereignity also gave players a reason to troll and ridicule the opposition and engage in other psychological warfare aspects; such as character assasinations.

Building on RMR; Propably the first step toward making EVE a more foregiving environment for new players with the introduction of tutorial missions. Additionally, tweaks to the RMR expansion really didn’t properly gave it the impression of an expansion.

Vivox added voicecoms and tweaks to fleet warfare really meant that not alot of effort was taken towards more community tools from the developers. Since Vivox unfortunately isn’t the best option when discussing warfare, many still use Teamspeak or other voice applications. Time would have been better spent developing a proper EVE voice client to complement the ingame UI in the long run.

More tweaks to corporation and alliance management, but also significant tweaks to Starbase warfare (sieges). Thus building on the tools that large organisations really require to maintain a momentum in conflict and the revenue generation required to maintain that momentum.

The realization that videos could be used for Viral marketing was a great incentive to further enhance the visuals in EVE to the point where players would be in charge of advertising the game, by unconciencly bringing news from New Eden to the rest of the world. Stories of great conflicts or great disparages was aired unfiltered, unscripted. Little else was provided to usher in more cannon fodder.

With danger of wow’y’fying the game, more conflict based on instant gratification is born in the form of factional warfare. It does however, not deliver content to the player driven sandbox that is driven on territorial claiming and settlement of star systems. Too little to be of any use on a grander scale it does deliver some form of content for ‘casual’ players that want to dive into semi-large scale fights without the drama of bloc politics.  Too many bosses and too few grunts mixed with the pointless rewards means that factional warfare rarely sees much action though. Players have little to rally over, outside of monetary rewards from complexes.

The expansion seemed more like a comma to the Empyrean Age rather than a standalone expansion pack. While there was a large number of fixes and tweaks, there were very few additions to the community created content game. A step forward, but a little and insignificant one at best.

With a focus on exploration of the unknown, this appealed largely to experienced players and groups that wanted risk back and continues to appeal and pull in new players to this content. In terms of social dynamics and metagaming it did nothing other than change a bit in corporation culture (because it was pointless to have a corporation with 3000 players when there was no benefit in settling unknown space). More diverse corporations and alliances formed, with more small gang warfare as a result. Many formed friendly aggression pacts (also known af FAP’s) to ensure ‘gudfites’. The content was face melting, and the method community building efforts (in order to un-complicate that process).What happened was a change in social dynamics for these people who went from wanting to break ‘your’ game to just wanting to break your tank and leave you with a smile on your face; much like uncomplicated make-up sex.

I suspect women had a say in this expansion as it also featured more tweaks and fixes to social interaction tools to facilitate these initiatives.

Resources made trivial, with trivial meaning uncomplicated and for everyone. The risk matched the rewards in terms of volume throughput of planetary materials. More twitter-like features in community interaction tools in the form of EVE Gate, but with the calender and mail system intertwined. Eventually expanded to include new forums with familiar features such as the ‘like’ button. Facebook’s in space.

The discouraging fact that youre facing an ever growing enemy is a big part of psychological warfare and something that puts a solid stick into the weels of progress … and conflict … and the vital engine adding fuel. Little point in resisting your enemy if that enemy can field a thousand ships. Null warfare stagnates and takes it first steps into carebear world. The cost of maintaining a big stick, in the form of readily available jump bridges (which means that large fleets can be literally several jumps out, but only a few seconds away) is next to nothing while defensive upgrades (cyno jammers) are twice the cost.

More advanced PVE to appeal to instant gratification gamers, little happened in the form of social development though. Subtle tweaks to community interaction tools and the game in general but this is to be expected by the team with the game at this point.

The potential to bring in more squishy players (roleplayers) that are unfamiliar with the harsh world of EVE was too good a potential to waste, however. It didn’t turn out too great. It did in fact turn out so poorly that the game developers had to drastically alter the pool of employees to reflect a new path for the game. With the new industry leading character creator the future path was laid out for that route (awesome) however it had cost so much in effort that the game suffered (awfull). There was little reason to why players would stay and for the first time in years, the growth in playerbase was stagnating. The tools were there to vent the frustrations for the players and they used those tools to their full extent and even took it to the next level. Internet warrioring helped turn a ship dead in the water around. Back into overdrive. Had it not been for the playerbase, there would have been no new content for them. It would reflect far into the future.

For community interaction it highlighted tools available to players outside of the game that was effective, but brought no content for the community (disregarding a popular demand ‘forum like’ button) and metagame. More dungeon raider gamers appeal and little metagamer appeal. The sandbox shrunk for the first time. To a large extent, it was a step back.

The first of the expansions to take action based on the community feedback. It was a landslide win for the Comunity elected CSM and brought in a slew of updates that players had requested. For the bulk of the players, it meant the world. For the community it inspired hope, but for metagaming it was a planted seed into a required nullsec overhaul.

For those of you that are into greek mythology, it was the equivalent of Atlas being relieved of some of his burden.

So where does that leave us?

Stratics is focused on the community, for us that means focus would be on planted seeds. Harvested and put to good use in a product. Which means that for Stratics, Castor would be the expansion where Metagaming really started; Exodus where it was kicked into overdrive and Crucible where we harvested the fruits of the CSM and community voices that was voiced in Incarna.

With focus once again on metagaming, I’ve no doubt that the future looks bright for the EVE Community but we would undoubtedly not have taken that path if it had not been for Incarna. The biggest mishap in EVE history.