Firefall Beta, Playing in the Sandbox

If you haven’t heard of Firefall you’ve been missing out. Firefall is a upcoming title by Red5 studios that combines FPS action in a Sandbox MMO World. If you need some explanation on what that means, let me try to elaborate. Firefall as an MMO doesn’t follow the standard “Go here kill X number of Y” equation. In Firefall the majority of missions you will be able to undertake are found in the wild. There is no mission chain to follow once you pass the initial introduction sequence which is refreshingly short and largely optional for those of you who wish to jump straight into the action. The fast paced action of a FPS is rolled into the blend, this is a game where positioning, and mobility are equally important to you ability to precision aim at targets at speed.

The setting of the game is Earth, and once complete the developers plan for a 1/10th scale model of the planet to be available for your exploration pleasures. Currently only Brazil is available as it is central to the background story of the game. The story basically goes as follows; around 200 years into the future, humans discover a new element named Crystite in an asteroid that impacts Earth. This element allows for the generation of almost unlimited power. Desiring more scientists find out the asteroid traveled from a near by start system. With the vast amounts of energy available they are finally able to create engines to make interstellar travel possible and create a ship to go harvest this new element at it’s source. The first trip is a success taking 8 years to travel there and back. With this new energy source new technology is created, including wormhole generation, thus reducing the length of time from 8 years to 8 days.

A new massive ship is created using these technologies, with plans to harvest Crystite and colonize the planet now known as Alpha Prime, and is launched. The wormhole generation effects from this ship are so great they don’t bend space and time it actually rips a whole in the fabric of the universe and an previously unknown energy pours through enveloping earth as the ship crashes down in Brazil. A few pockets remain habitable to humans as the energy source called “The Melding” mutates living creatures in areas it covers. Thanks to the technology developed to protect ships during travel through wormholes the still functioning engines of the Arclight Drive also acts to repel melding energy rendering bubbles of habitable land.  In these bubbles Humanity struggles to survive against the mutants created by the Melding, creatures native to Alpha Prime which escaped study facilities, bandits making the most out of the chaos, and a new humanoid species known as the Chosen whose origins are unknown. 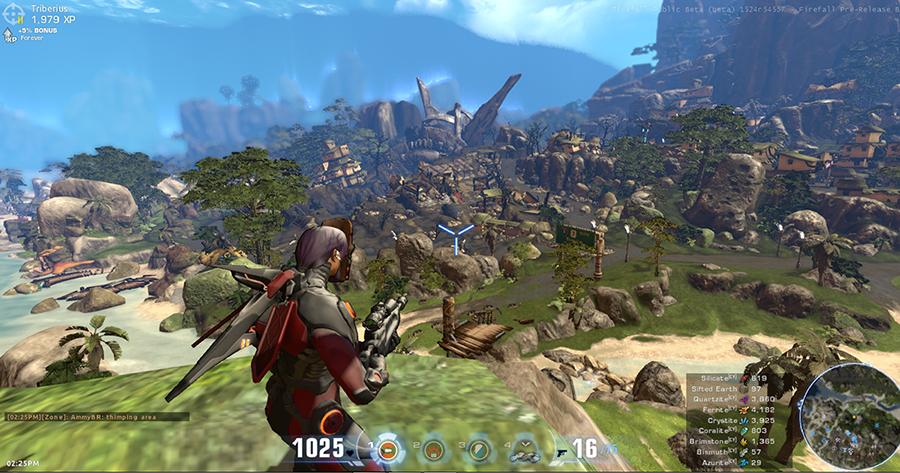 The ruins of the Arclight

To aid in the struggle for survival, the nations of Earth that survive bound together to form the Accord. To supply this military defense force, the largest corporations develop Battleframes in order augment the abilities of humans to better combat the new dangers faced. Naturally, as with many military projects, these Battleframes made their way to the public and now mercenary forces use them to assist the accord and defend humanity, often owning more than one Battleframe. Battleframes come in several basic types: Dreadnaught, Assault, Biotech, Engineer, and Recon each serving different functions.

Crafting in Firefall is done via the Molecular Printer you can find in most of the larger settlements. Once a player obtains a Tier 2 Battleframe they are able to craft upgraded versions of most unlocked modifications for their Battleframe. Crafting materials are acquired through a process called Thumping, when thumping mobs will attack your thumper requiring you to defend it until the resource extraction is completed. You are also able to craft med packs, ammo packs and other consumables here, as well as refine your acquired resources into more useful isotopes.

Graphically Firefall is a beautiful game. The areas are well designed, with organic patterns. Characters look a touch cartoony and not quite part of the world setting sort of how when you see Cartoons mixed with live action in films the cartoons seems to stand out as if they are on top of the background. The sound in game is excellent, the world music is often low and foreboding, which reflects the devastation or isolation depending on where you are in the game world very well. Even towns and villages have a somber downbeat feel to them at times reflecting the chaos of the world around them.  Gameplay is smooth and fluid, something it gets from it’s FPS lineage, and I was surprised at how well it runs on my mid range machine even with all setting maxed.

In all, Firefall is projected to be an excellent game, though at the moment there are a few issues that with luck will be addressed. There is no Group loot distribution, something that would be useful, especially for Recon Battleframe users as they are often too far away from drops to justify leaving their sniping position to go pick them up. Currently the limited map area is too small for the number of people participating in the Beta though that should expand as time progresses.

If you can manage to acquire a Beta key this game is well worth checking out, the variety of types of Battleframes you can experience and the ability to change Battleframes without logging out is a huge perk. Your group need a Biotech, go to a Battleframe Station and switch up, need a Dreadnaught no problem. The Sandbox elements are refreshing, as you don’t need to hunt down NPC’s to take and turn in missions, you get to spend more time exploring and combating enemies.

So check this game out at http://www.firefallthegame.com and keep an eye on their forums occasionally people will give away extra beta keys on there and with luck you too can get your chance to try this excellent game.