Welcome to Metro’s 25 man Heroic Healing guides for the Siege of Orgrimmar! It is important to understand that these guides are first aimed at helping healers understand their role, and then helping them maximize their play. Each will feature a general overview of the mechanics that matter to the healers, and conclude with a class-specific discussion. Let’s begin!

The eighth encounter of the raid features the venerable Nazgrim, once a grunt in the service of Thrall, now a raid boss and general for Garrosh. Despite being an interesting and well developed character and climax, healing this fight is very likely to put you to sleep, but we can still go through what has the potential of going wrong and discuss how it can be maximized.

While the encounter is no different fundamentally from Normal, it’s important to realize that the adds are now a VERY real threat, and essentially act as the enrage timer.  There is no way around this, so the first thing that you should understand about the encounter is that DPS is MUCH more important than healing. With this in mind, I would imagine most guilds would look to 4-5 heal this instead of 6, so be prepared for that.

Other than that, the only new mechanics are Execute, which does next to no damage, and the Sniper which will be important.

Understanding your role as the healer on this encounter will be a bit mundane. The mechanics barely do any damage at all, and the only two things that could do sizable damage happen when there are mistakes being made that you will struggle to recover from.

With that said, there will still be things we should focus on and be aware of as healers so let’s get started!

The first set of mechanics that you should be concerned with are tied to the Rage meta-mechanic. Every single time Nazgrim uses an ability, it should be Heroic Shockwave or Kor’kron Banner, so if you have a War Song or Ravager get off, your raid has made some mistake. The Ravager mechanic itself is essentially a death sentence, so there is no need to discuss that here. However, the War Song is something that can be dealt with from the Healer role.

War Song will deal 65 percent of the player’s maximum health in physical damage, so this makes it quite dangerous. I believe the mechanic is meant to be a punishment for mistakes, so if you see 2-3 get off throughout the encounter consider talking the strategy over with your leadership. Every legitimate pull we have of this encounter features zero War songs, but when it does happen the only thing to do is be prepared with a CD. Since you will essentially never need Tranquility or Divine Hymn on this encounter any other time, this seems like the logical time to use them. This will result in healers bottling their CDs, which is obviously suboptimal, but I honestly would not recommend using them anywhere else, as they will be 90+ percent overhealing. On top of this, if you DO chain some war songs and you don’t have CDs available you will wipe, so it’s better to play safe and sit on them then trying to maximize on a fight with nothing to heal.

With those mechanics understood, let’s discuss what will happen with the actual tanks and pseudo-tanks you will use for this encounter. In our setup, we have two tanks on Nazgrim at all times, 1 gathering the Ironblades and tanking them for large portions of the encounter, and three DPS playing the Pseudotank role. This includes a Ret Paladin on the Warshaman, a Rogue on the Arcweaver, and a Mage on the Assassin. The Ret paladin is responsible for treating with the Shaman and keeping it from getting mixed up with the multiple spinning menaces. The Rogue is responsible for making sure the Arcweaver never gets a cast off and also keeping it away from the rest of the adds. The Mage won’t actually have threat on the Assassin, but is responsible for slowing and stunning it so there isn’t a dps running around in circles for 40 seconds at a time.

All of these subroles should never need much healing, but I consider it the job of the healer to assist them as much as possible, especially the Warshaman target. The Warshaman will hit very hard, so if you have a stun, external, or can Denounce (to ensure no crits to non-tanks), you need to do it when they come out. Otherwise, spam heal whomever has threat. Of course, it’s possible to tank the Warshaman with the Ironblade cluster, but if you do this, the melee can’t attack, and you run the risk of having the whole cluster healed up with one totem drop. This is up to leadership, and just mentioned to clarify.

The Heroic-only add, the Kor’kron Sniper, is a real threat, but once again is trivialized by actual DPS, so the healer’s role should be minimal. Whoever is targeted by the sniper will take consistent high physical damage, so it’s on them to CD when needed, but on you to heal them otherwise. The best advice for this mechanic is to immediately target them via a macro such as
/tar Kor’kron Sniper
OR
/focus Kor’Kron Sniper.

Once you have them on your radar, just notice which player they are targeting and be prepared to heal them. Realize that if that player dies or drops combat (IE invis,) the sniper will pick a new target, with a high potential of it being someone not prepared, causing a spray of damage to hit the whole raid. As we did on Galakras, recognize the fact that stunning the Sniper to interrupt its Shoot mechanic, or stealing its weapon as a monk are better investments of globals than actually healing the damage up afterwards.

Notice and Laugh at Dead Bombkin!

The only other thing that can be an issue on this encounter is brain-dead players getting hit by the Heroic Shockwave. It is possible to survive this, so I’ll list it as a viable mechanic, but more likely the player will just be 1-shot, and they should feel bad about being so, as it is so easily avoided that it’s just an embarrassment to see happen, especially if your raid has completed mechanics like ones on Sha of Pride.

The push for the enrage timer will be the only strenuous part of the encounter, but provided the extra tank picks up all the last set of adds, you can just skate through this bit as well. If things do not go according to plan here, expect high magic damage via the Arcweavers free casting, and Ravagers picking off DPS as they roam.

In terms of potions, if you need one I’m confused how your guild has made it here and what you are spending your mana on, so let’s just leave that off our check list for this.

Unfortunately, Nazgrim has been the least interesting fight as a healer I have done this expansion, and I typically find myself spending more globals on DPS and denouncing, then I do on actual healing.

Holy Paladin: Denounce any add meleeing a non-tank class to ensure they don’t get crit. They will die if they do. Hand of Sac if you see Execute after a War Song mistake. Fist of Justice any adds that are a problem, especially Warshaman or Sniper. Stunning Sniper when on Clothy is much better investment than trying to heal the person.

Resto Shaman: Offer to step out, as your best abilities are completely useless here. Nothing other than Earthshield will ever be needed for any reason.

Resto Druid: Ironbark melee DPS pseudotank just to say you contributed? Better have tranq if the group gets a War Song or I’ll report you!!

Misty Monk: (Do not currently have a monk healer in our progression.) Full time Fistweave to help bend the enrage timer. Leg Sweep to save damage on adds targeting players that need help. Steal the Sniper’s weapon and it will do no damage. 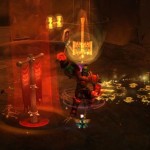 Most boring fight to heal in the expansion unless your raid group is doing a lot of things poorly. Offer to step out to make sure the DPS check it met, which is actually really tight – hard to believe when looking at healing requirements. Use stuns on adds to reduce damage, and do as much DPS as possible. If you need a mana or zzz potion here you are being carried – consider quitting raiding to help the guild progress faster.