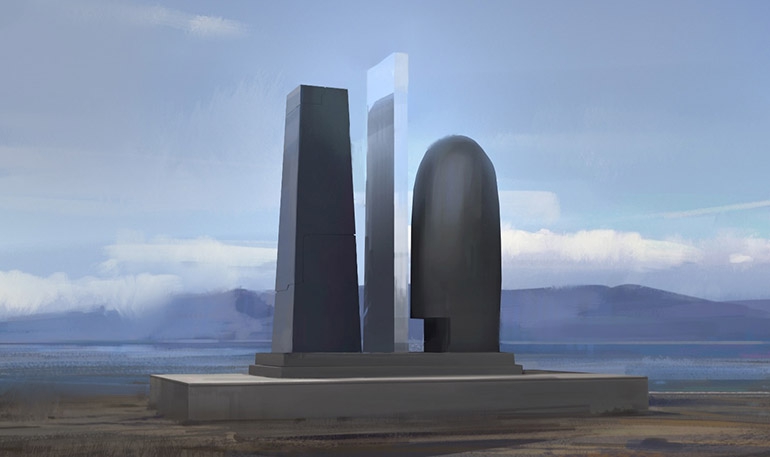 CCP is celebrating 10 years of the EVE Online Universe in grand style! Today they confirmed their announcement made at last year’s Fanfest, a real-world monument to Players will be revealed in the harbor area of Reykjavik, Iceland the day before Fanfest 2014 starts!

“Our intention is to immortalize the contributions of the millions of people of the EVE universe in a way that extends beyond their immortality in our games,” said Hilmer Veigar Petursson, CEO of CCP. “Honoring them as part of a timeless monument shows how virtual lives and adventures have reached a new level of meaning and impact that weaves into and enhances those that happen in this world. We are humbled by all those that have joined us on the journey so far, and it’s our hope that this physical piece will continue to gather energy and relevance into decades to come, becoming like EVE Online and outliving us all.”

Indeed, a tribute to the Players and the People that have lived, loved, laughed, cried and died (many times) in the game as well as out of it, the monument is also a gift to Reykjavik, home of CCP Games and EVE Online development for 16 years. Being the northernmost capital of any country in our world, this tourist destination will definitely benefit from the gift – as will CCP Games, too!

The monument is an outdoor sculpture by artist Sigurdur Gudmundsson with help and input from EVE’s very own art directors, Borkur Eiriksson and Asgeir Jon Asgeirsson. It is expected to stand over 5 meters (about 16.5 feet) with two “heads” facing each other with a polished-steel mirror betwixt them. This is to represent the players behind the game. A quote from the EVE Universe as well as other marking are meant to spur interest while anyone with an active paying-account on March 1, 2014 will automatically have the names of their “main characters” (which ones we are not quite sure) etched upon the metal-plated concrete platform. A special tribute to EVE Online players who have passed away will also be added to the monument.

A web-based application will be made available to help find your character’s name upon the monument. And the icing on the cake will be a laptop serving as a time capsule. Contained on its hard drive will be videos, messages, wishes and all sorts of dedications and other tidbits from the players and staff.  More will be revealed about this time capsule in later news as the unveiling comes closer. In a sense, this is CCP’s way of thanking everyone who has helped EVE Online to be included in a secular group of games inducted into the permanent collection at Museum of Modern Art in New York for a new category of artworks. Now that’s classy!

There is much more info being released every day about the events for Fanfest 2014. Make sure you check back, and often, as we gather more news for you right here at Stratics! If you want to get it direct from CCP, here are some links for you…

Winners of the “Women of EVE” Contest