Hello and welcome to our newest series inspired by our third Podcast (https://stratics.com/interviews/wow-stratics-podcast-3-spotlight-disadvantaged-gamers/) where Metro discusses how simple UI elements can make a world of difference and helps players looking to take their character to the next level do just that. As mentioned in the Podcast, if you aren’t playing with proper Keybinds, Macros, or Addons, you might as well be missing a hand compared to players who are! These guides will be focused on players who already understand the class/spec and are looking to elevate their game to the next level. The experience I have with each spec is almost purely through Challenge Mode dungeons, and can say these design elements can make or break your play and will tell you if / when you are ready for that next step. Let’s get started!

Today we will examine Restoration Shaman and show how a few simple indicators can take your play from moderate to exceptional.

If you have healed any raid content before you will immediately realize the versatility of the Restoration spec for Shaman. Not even looking as throughput, they bring so much utility its absurd. They have everything you could want as a healer:
– A Massive AOE CD (Healing Tide Totem.)
– A Massive Throughput Increase (Ascendance)
– A Mana Cooldown, that scales with your stats and is RAID WIDE! (Mana Tide Totem)
– And a Reduction CD, that is arguably the best in the game for anything that hits more than once in its duration (Spirit Link Totem).

With all these tools, it makes you think their other spells and heals must really suffer. It would also be logical to say that with the best mana CD in the game, surely they must run OOM very quickly… RIGHT?
Good joke.

On top of the CDs, Shaman have the best single target heal in the game(Healing Surge), the best ground/smart aoe heal (Healing Rain) and the most efficient cleave-heal (Chain Heal.)
And if it weren’t for Daybreak and Evangelism, they would have the best combo in Tidal Waves as well!

Anyway, now that you know the basics, let’s talk about how you can maximize your play as a Restoration shaman, especially inside Challenge Modes and smaller group content. Before we continue, here is a screenshot of the set up I am currently running. We will break it down one group at a time!

This will cover all your major cooldowns as a block, as its important to understand that they are defined as such, and are truly “major.” Understanding each of these abilities is paramount to your success as a healer, and is why I took the time to define each of the major Healing CDs. Also in this group, as you will see below, is Astral Shift and Ancestral Guidance. The reason they aren’t shown in my original UI screenshot is because I do not currently use those talents. Astral Shift is a very strong talent for raiding, especially on some encounters, but 40 percent for 1.5 minutes is just straight up overkill in Challenge Modes. If you need a 40 percent reduction as a healer in CM you are in trouble from the start, so I prefer the 1 minute CD of Bulwark Totem. Its lightweight, and persistent, helping you absorb consistent damage throughout the time its available.
As for Ancestral Guidance, I don’t ever see a use for this in any type of content, especially not Challenge Modes. This is meant to be a CD for DPS to use to outheal a healer, but if you are DPSing as a resto shaman and expecting this to do your work for you, you are going the wrong route. However, it is still a viable choice, and included for your benefit. I would strongly recommend Rushing Streams instead though!

This string is extremely basic though, and as per the screenshot, you will see it shows them static when available, and then ticking when on Cooldown.

Find the Import string here. Open the pastebin, copy the string, then paste it in the Import section of Weak Auras in game.

Now that you have the Major Cooldowns for big moments, the next order of business is the rotational CDs. These are the ones that the tracker really helps on, as they are short CDs that you will often forget about in the heat of battle. Realistically, even WITH this on the screen, its still common to find myself complacent and missing things. Hopefully, more than just hand-holding, this will help give you visual queues for the rhythm the spec commands. Its very much a balancing act with all this utility, so getting the “rotation” down to muscle memory will help you learn when things are on and off CD without actually needing the help.

On this tracker, starting left to right we first see Ancestral Swiftness. This is a great CD, but I like the Elemental Mastery for Challenge Modes a bit better, and Echo a bit better for 25 man raiding. Of course, its there if you like it. Next over is the most important one, being Healing Stream Totem. This will do some SERIOUS work in Challenge modes, especially with Rushing Streams. I usually see this, Riptide, Earthshield and Healing rain do near 100 percent of my healing unless the tank is REALLY getting rocked, so make sure its down as much as possible. From there, we see the timer on Riptide and Healing Rain, both of which we want down 100 percent of the time. You can make a case for not putting Rain down here and there, but IMO even if its only ticking on the tank, its still worth it, as you can use that time to Lightning Bolt back some mana! The final piece here is Unleashed Elements tracker, which is more for show than anything. You aren’t really ever going to get more than one heal off in its duration, but if you are trying to meta game it, the tracker is there. As soon as you use the ability, the window appears showing the buff duration.

You can find this string by clicking here!

Short but sweet, this tracker will help you know exactly how many tidal wave stacks you have. If there is no number, you have none! Once again, this will be a visual queue for what should eventually become muscle memory. The more you play the class, the more you will find yourself memorizing how many heals after each Riptide have been cast. Easymode!

Click this link to find the import string for this lil guy!

This ability may be being removed in Warlords, but its still one of the best utilities we have right now without question. Since its a five minute cooldown, this tracker will also help you with Fire Elemental. In CM, you should ALWAYS place them down together, and should coordinate this with big packs or Bloodlust periods. In actual raiding, you will need to discuss who is using which totem at which time amongst the other shaman, but as long as you use it when its needed, the timer will help you remember when both are back up.

In this tracker, you will find a duration monitor, as seen in the screenshot below. Once the totem has expired, you will then see a cooldown ticking like previous examples, and once it has returned from Cooldown, it will be pulsating to help remind players that its up.

Find the Import code at this link!

That concludes the Weak Aura component of this guide, but there are still some other things that are worth mentioning before we wrap up. A HUGE part of playing a shaman is the fact that you have a ranged interrupt. This ability was considered the best interrupt in the game before Cata, and should still be a major part of your play, especially in Challenge Modes. You are the only healer with a ranged interrupt, so if there is ever a situation that you are broken up into small groups, you should make sure you are using it as much as possible. Nearly 100 percent of the time, interrupting something in a raid will save more damage done than simply casting a heal instead.

Because this is the case, you want a “stopcast” macro for the interrupt. Here is the macro I use:
/stopcasting
/cast Wind Shear
#showtooltip Wind Shear

On top of this, you will also be able to use this ability in place of a functional stop cast. As long as you don’t have an enemy targeted, it won’t use the ability, so if there is a time you need to stop a Lightning Bolt, this can help you. I say this because typically, players just use movement to stop a cast, but since Lightning Bolt is now baseline on-the-move (at least for now,) the movement wouldn’t help you.
This can be a great tool.

These two things fall into the category of actual healing spells, so I don’t find it pertinent to have Weak Auras for, but still important to track in some way. The first thing two things you need up 100 percent of the time are Water Shield and Earthliving Weapon. 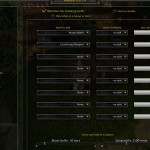 In the Screenshot, you see just how that’s done. I am currently using Healbot, but it can be done in Vuhdoo as well. Simply set it up so it monitors whenever one falls off, and you can immediately refresh it. Luckily, Earthliving is an hour buff, and water shield no longer has durations so this should be MUCH easier than the BC days.

The other major concern is Earth Shield. I haven’t found a way to track Earth Shield with Weak Auras that is more efficient to this method, so I just stick with it. Its default on Healbot, and I’d imagine it would be default on any other clickthrough addon you can use now for healing so there shouldn’t be much to discuss. Just make sure its also showing the amount of stacks, so as soon as you see it about to expire you can refresh it. This ability will be of massive importance in challenge modes especially, as the tank spike damage can be negated a lot. Its also super useful with the current 2 set bonus in SoO!

Well that’s everything, so if you have any questions, feel free to leave them in the forum attached to this topic, or contact me in game.
As always, I am not fluent in the program, and usually find people who ARE fluent and modify their work. The original source of this came from searching the internet and finding this thread.

It’s important to remember that you are the best person to help yourself improve, but with tools and help from those already experienced you can transform yourself into a top-tier player near instantly.