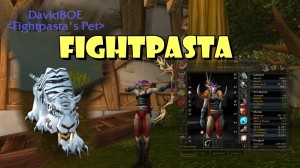 Cloaked in a black shroud and heirloom mail shoulders, the mighty ‘Fightpasta’; Legend amongst her own Night Elven kin, makes her way down the fiery chains of Blackrock Mountain, unprepared for the adventures that await. Following closely behind her, the mighty Tiger she had raised from a cub; ‘David B.o.E’ and the sound of many other players, their chain and plate mail clinking at every footstep, similar in appearance and style. This then was the first community event on European cross realm servers for level 50 twink characters, an ambitious idea supported by significant restrictions.

The idea was simple, get as many people to create level 50 characters and equip them with the best items they can find at that level. With that came profession choices, specialisations, talents, buff selection, pet choice, etc. To try and do as much level 60+ content as possible with characters not suited to that bracket. Continuing on our journey, my character, the mighty huntress was chosen by the team to support the raid with particular bonuses that came from pet choice, and it would soon become apparent that David B.o.E (The Tiger) would not be useful within the Molten Core, and so I waved goodbye and brought out my trusty, yet less well named Boar; ‘Rammy’.

Now you may be aware that Molten Core has some particularly painful trash between and prior to nearly every boss within the instance, so it was decided that a level 90 would clear the majority of the annoying trash and then leave the instance. A short leisurely, yet fiery trip further down the ramp brings us to the tunnel before boss number one; the formidable Lucifron.

Lucifron, one of the many Lieutenants of the mighty Firelord himself, is not particularly anything difficult. He has 3 abilities; One which does shadow damage to nearby enemies every 10 seconds, another aoe that does shadow damage to nearby enemies, and his curse which causes nearby enemies to have a 100% increase in all costs to all spells and abilities for five minutes. Supported by two Flamewalker Protectors, of which do nothing particularly special aside from a mind control on one player for 15 seconds, the whole tactic is as you would guess to destroy the additional enemies prior to doing damage to Lucifron himself.

Tactics aside the communication barrier is broken, as another of my kin, a fellow hunter steps too close to the boss. Suddenly the room is awake with arrows flying through the air and spell effects blocking out the darkness in the dingy tunnel we were fighting within. Surprisingly, the casualties are minimum and shortly after the initial pull the tanks have the boss and his minions under control. The raid went with 23 level 50 characters, 3 of which were now dead on the floor. Just under a minute later Lucifron and his minions are dead, adorning the floor with their serpentine appearances, 20 colourful champions stood above them rolling for loot that none of them can use.

So then, that’s a slice of the experience so far. As we continued the bosses became increasingly more relaxing, and easier. The sheer differences in class dynamics and scaling of statistics on pieces of gear has essentially made many things possible for low level characters that should not be, and to some extent made the experiment somewhat pointless. Personally I expected to have more resistance from the giant elite level 60 bosses of Molten Core; a place that I can only imagine would have been extremely irritating rather than complex.

Being stood there, with 22 others in those underground halls gave me an impression only equal to half of the scale of raids that would have been taken to the instance in its 40 man days. Yet the whole thing felt somewhat underwhelming, like the mechanics of the bosses were basic, and to many extents trivialised by simply using raid markers to direct the raid. We didn’t use a voice communication server, as such that I thought would at least increase the difficulty of the event, but it didn’t. When people regale me of times they had in ‘Vanilla’ WoW, they speak of how epic and grand 40 man raiding was, how they had these fantastic experiences that cannot compare to today’s raiding scene. Bosses fell in minutes, and granted characters could not have done this all those years ago, and in many ways this only demonstrated that twinking at this level offers very little challenge or reward, unlike the 70 and 80 Brackets.

The mechanics we saw on the bosses were simple, and I would argue that fights such as Baron Geddon; Where you must move from the raid with Living bomb and then return, all of these basic mechanical pre-requisites for completing the fight are all present in current time within 5 man heroic dungeons, and to some extent normal mode fights. Perhaps as the game has developed over time, so has the skill of the average player, or rather the requirements for that player to engage in harder content.

So when I think of the amazing stories I’ve been told about how epic the raiding was back then, all I think of is how 40 people overcame communication boundaries and a poorly implemented series of game mechanics and unbalanced classes, and that in many ways the experiences they had felt good because of their accomplishments within their own community, with their friends. I have the same feelings about The Burning Crusade, many times I remember how our Karazhan runs would be filled with laughter and progression, but the fights themselves weren’t all that great. The people I raided with and the communities I engaged myself with are what made me play World of Warcraft, and continue to make me play the game to this day.

It’s safe to say that 40 man raiding would not work within the WoW we know and love today, because the limitations of what can be done mechanically, is completely dependant on organisation. If you could run 40 people into any of the MoP raids, do you think the various mechanics that made those fights difficult would remain the same? Honestly, the more people you have versus an enemy in a hot-key based MMO, the less likely it is you will follow mechanics and the more likely it is you would zerg it and go all out. Look at the isle of Giant with Oondasta, the great killer of pugs. That dinosaur has 2 mechanics, all of which rely on a tank facing the boss away from the raid to prevent a wipe, yet ‘Frillblast’ was the cause of endless wipes.

Ordos has mechanics on the Timeless isle, yet groups I enter fill with 40 people, with many others also taking part in the fight from without the raid group each week. The mechanics go from being structured points on the dungeon journal to what they are in reality, stand on the boss and move around with him whilst 12 healers put down healing aoe’s completely negating the damage that would otherwise kill you. There is strength in numbers, but very little skill.

This is the first week of our adventures in level 60 content, where we have cleared all bosses within the Molten Core, and the first boss of AQ 40, where soon after we called the raid due to losing members to time commitments. It’s something I will continue, simply out of curiosity mainly, as I want to find the point where the game changes, and in turn the difficulty of added mechanics make our progression near impossible without the communication and strategy that’s present in modern day raiding.

I hope you have found this article interesting, and if you wish to continue this discussion further please drop over to the WoW Stratics Forums, where you can tell me all about your favourite days in WoW and your own experiences of the changes in raiding.

#RACEto20K ~ How to Stay Interested in MoP while Waiting for WoD!