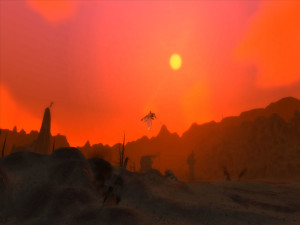 When you recall the best memories you’ve ever had in World of Warcraft, what do you think about? Personally I remember The Burning Crusade expansion like it was yesterday, logging in each and every day to do heroic 5 man dungeons to get my badges of justice, saving up for the next piece of vendor gear. Each week preparing for the Wednesday, Thursday and Sunday raids and generally managing the guild I led for Karazhan and Zul’Aman raiding. My experience in raiding with my own guild was one of absolute enjoyment and a fundamentally less serious atmosphere than what I would look for in a guild in current day WoW. Our Hunter; a dear friend of mine who has since quit the game would always be the butt of jokes in our raids. Much of the time for accidentally pulling trash or bosses, the fact he would literally walk into a pack of trash mobs or accidently put his pet on aggressive and yet NOT mean it, clarified by the expression “Oh Shiit” on our Ventrilo Server, was the funniest thing I can remember. As much as many people would be aggressive in this situation, at the time we found it particularly entertaining and to be honest he wasn’t the only one to do something that would be considered griefing today. The differences between then and now are basically my own, where I feel that the game has been out for so long that I literally forget that there could even be new people playing for the first time. 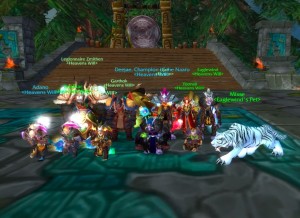 Our guild; ‘Heavens Will’ on Frostwhisper EU was filled with the friendliest group of people you could ever meet. We all had our problems, and personally I had only just started to play the game that same year and found everything as funny as the others. Our progression was average for a guild in our situation, but it was enough for me. It was always cool to achieve downing a new boss for the first time, but we never saw that as the main objective in raiding. Raids where a time when our guild would centralise in one group and enjoy themselves 3 times a week together. Granted we achieved quite a deal for what we were, clearing Karazhan and Zul’Aman, but not much further was possible with the general skill level of our team. That was fine however, as some of us were known throughout the community with the other guilds. This is the side of the game I miss the most; doing dungeons with your own realm and not through a cross realm looking for group tool certainly had its advantages.

I gained the respect of many guilds on my server, one of which; Elysium; a wonderfully skilled group of people who progressed on Black Temple and then Sunwell when it came available. Many of the times they would need to occasional DPS or a Healer to fill their groups as they would for some reason miss 1 or two people each week. I saw this as an opportunity to see more of the game, and my own guild didn’t mind since we still did our own raids together and they knew that they had neither the time in week nor the commitment to do other raids.

I levelled my Holy Paladin to level 70 shortly after I knew this would be a regular event, where members of that and other guilds on the server would group together to ‘PuG’ older raids such as Tempest Keep or Serpent Shrine Cavern. It wasn’t long before my paladin became much more geared than my Warlock; simply more opportunities arose for my healer than would ever for my DPS. I really started to enjoy healing, the rewards were great, the feeling of being a needed part of the raid group excelled much further than it ever did as a dps. My Warlock still remained my ‘Main’ as that’s what I raided with in my own guild, but when the time arose and a healer missed our own raid one evening I would log onto the Paladin and heal away. This flexibility helped actually progress our raid much further, and it was at this point I realised how integral it would be to keep both characters geared. 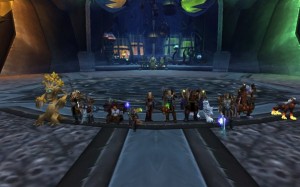 Wrath of the Lich King came out the following year, filling my guild with both new recruits and new interest to get more acquainted with progression, and much less about the ‘fun’ aspects of casual raiding. As much as this was perhaps the most progressed I have ever been in my own Guild, clearing content as it came out and competing with others on the server, it certainly wasn’t my favourite. The border between causal raiding and progression is a fine one honestly, as much as the two have different interests they are basically the same, only more serious during attempts and still enjoyable between bosses. The changes we put onto the guild with progression as our focus actually crumbled the foundations of who would be able to both raid with us and who would stick around for a more serious atmosphere on the tougher fights.

I like to see this point of my experience in the game where I essentially ‘grew up’ and decided that the goals I needed to achieve were greater than they used to be. Sacrifices were made, but for the better of everyone’s gameplay and enjoyment of the new content that we could now for once get to see, as appose to raiding content years old whilst new raids were other guilds progression targets. I remember The Burning Crusade so fondly because of both the people I raided and met on my server, but also the start I had in this game, without which I would of never had enjoyed the progression to who I am today, both in game and in real life. I have to say that my interest in YouTube and to some extent where I am now writing on Stratics is down to the ability to learn that both sides of progression in any game rely on an open mind. It saddens me to go onto the WoW Forums and see people talking about how good the ‘Good ol’ Days’ were in World of Warcraft or hating on other MMO RPG’s out there based purely on fear for competition. The truth of the matter is that your experiences in any game are your own, and if you feel that a certain period was much better than any other, much of the enjoyment you found at time you spent during those glory days would very likely be down to WHO you raided or played with, rather than the actual content you did or the part of the game you played most.

The World of Warcraft we know and play today is NOT the same game we all played 1, 2, or even 9 years ago, and we should be happy about that. Without evolution of a product, what interest can there possibly be. It’s currently hard enough to enjoy the lull in activity between content releases as it is, with many of us that are waiting for Warlords of Draenor playing other games such as Diablo 3. I’ve had this game since its release, yet it’s only now that I’m playing it to the point of the same time I would usually spend on WoW. The new content is just around the corner and I have to say that progression feeling is coming back to me, and I think a lot of people will get the same reinvigorating feeling the closer we get to WoD Beta testing.

Mists of Pandaria was by far the most constructive and developed product so far in WoW; much of the content in the game now offers opportunities that simply were not physically possible 8 or 9 years ago. Phasing and individual scenario instancing has allowed for compelling solo player gameplay, new character models and designs are altering the visual aesthetics of the game to be more appealing to the eye. New PvP systems are being tested and used to enhance the accessibility to general PvP and push the bar at the top of skilled players even father up with new leaderboard technology. There isn’t a single piece of the game that has been put into MoP that isn’t an addition or a positive / necessary change to the basic principles of the games enjoyment. I challenge anybody to say the game is worse for any game breaking reason today than it ever used to be, because it simply isn’t true. The experiences we all had when we started playing the game are ours and we should keep those close, but not use them as excuses to enforce illogical points onto why the current game is bad. Opinions are great things, but if they are enforced with nothing but rose tinted dreams then whats the point in expressing them.

If you enjoyed my article discussion here, please feel free to go over to our forums to talk about your favourite time in WoW and your opinions on where WoW is going. For everything World of Warcraft, look to Stratics. HERE