Is ‘Azeroth Choppers’ a Waste of time? 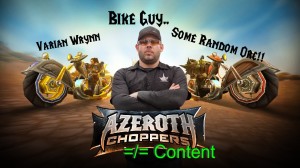 By now you will have all probably seen Blizzard Entertainment’s recent venture into reality television; Azeroth Choppers. A show with one goal in mind; to create a real-life motorcycle based on in-game themes for both the Horde and the Alliance. The bikes will be voted on, presumably towards the later stages or end of the show, with the bike generating the most votes by viewers getting immortalised within World of Warcraft for the winning faction as in in-game mount.

So, as the title may reveal, im worried if this is in some way a distraction for a much greater issue ahead of us. The estimated time between now and the next expansion / patch will surely prevent the game from being as enjoyable for those who have already cleared progression bosses by this late stage in the expansion. We get information at Blizzcon that Warlords of Draenor will be arriving “a lot sooner than many people expect.” Well, that’s great news, but honestly with a possible October release of the expansion and the testing process not even past internal company Alpha stages at this time, it could be a very long wait and ultimately tedious time to play.

The major lack of content has previously been my one major complaint for World of Warcraft, but then on the other side im trying to be patient. If you remember, or are unaware, the previous attempt to create filler content between expansions resulted in Ruby Sanctum. The Ruby Sanctum was arguably a good raid instance, however provided only one boss for raiders to encounter and definitely felt ‘tacked on’ to an expansion that had previously seen one of the most memorable and enjoyable raid instances; Icecrown Citadel. Where my patience runs out somewhat is when we have a lack of information on the project that matters and instead see a reality television show with questionable intentions brought out of nowhere instead of the information we all want to hear.

Azeroth Choppers is a very high production value piece of media entertainment and that comes across clearly in each episodes editing. The opening scenes are fully animated with bikes roaring through Azeroth to a ‘bad-ass’ rock soundtrack, the camera cuts are akin to those seen on high-end reality television shows and the general idea on paper at least is actually quite a cool concept. The problem then comes with both the length of each episode , the understanding that this is a concept brought to light to fill time AND how the ‘contest’ itself will be received by the actual players of the game.

Firstly lets evaluate the time aspect of the show, since this is the more irritating aspect of the show for me personally. The latest episode reached just over seven minutes, which would ultimately be acceptable were there actual content portrayed within each minute, however it consisted of endless recap of the same question or situation played over and over. It was almost as if every full minute of video there had been some unseen AD break and the show was recapping for those who had just tuned in. As far as I can tell, the show is published only on youtube and embedded as an internet tv show via episodes on the official Blizzard website. The whole ‘series’ if you want to call it that will presumably continue this timeframe for each episode, with the list of all the expected episodes shown on the official website, numbering only 8 episodes. Maths has never been my strong point, and im infact numerically dyslexic yet even I can calculate that would only mean on average, even if every episode was as long as the longest out so far (9 minutes of length) then we are only going to see 72 minutes of actual series. Another aspect which was brought up recently in discussion with people in my WoW guild was that this is already pre-filmed. Clearly in the previous episode you can see snow on the ground in the area of the workshop, however the snow has been vacant from that actual area for over a month. Considering they only had ‘5’ days to build the bikes, that would mean that they have both already been built. So the question is, why string it out into such small episodic content? Why not just put 3-4 episodes up of a decent length. The show itself suffers from over-editing and definitely would benefit from being 15-20 minutes in length, then perhaps we could avoid the speculation on what the ‘good news’ and ‘bad news’ actually is in the same episode, instead of asking that same question for 9 minutes only to find out in the first 2 seconds the following week.

Imagine If This Happened…

Next lets look at the actual concept of the competition, or contest part of all this. The idea is to create in-game mounts which players will get presumably for free as a result of that particular bike winning enough votes, and the other bike will NOT be included in the game. These two bikes are faction based, so If I play Horde and the Alliance chopper wins the contest I cannot get that bike for my character in game. Here’s the problem with all that; The community in and around World of Warcraft like to be vocal about many aspects of the game, more noticeably than anything else is the endless “Blizzard favours Horde over Alliance” or similar biased statements that usually result in a preverbal ‘Shit-Storm’ on the official game forums and affiliate fan sites. If then you take that into context, and expect the community to react well to the winning bike going to either faction, and not their own, im pretty sure I don’t have to break out the calculator again to tell you what will happen. Now I have talked for hours with fellow guild members and other Stratics members to guage their opinions and predictions and I think its fair to say that everyone predicts significant whinging and a fairly negative atmosphere in response to whoever wins. One such thought is that perhaps the winning bike will be put into the game for the respective winning faction for free, and that the other bike WILL also be put in, BUT will cost people of that faction IRL money to purchase from the in-game store. How better to increase profit from such an expensive and time consuming project than to sell the losing teams bike alongside other designed store mounts.

Finally there is the filler aspect, and the fact that this is taking attention away from the game itself. The Mists of Pandaria expansion is all but over, with no plans to make new raid content between now and Warlords of Draenor’s release, the following months are going to be fairly unproductive for many players, and could cause numbers of subscribers to drop again quite significantly until the next expansion. Personally I feel that no matter how little in size the show is, or however stretched out and terrible it actually is, can actually be seen as nothing more than wasted assets and time that could possibly have been used to expand on something more fitting in-game. Seeing a 7 minute long show each week for 8 weeks doesn’t make me any more interested in logging into WoW, but then im not sure if anything would, short of something fantastic in game that the whole guild could do, like say old scaled raids or something. Either way, I feel that the idea, concept and execution of Azeroth Choppers is not ideally suited to the game we play, nor is it something that I would like to see repeated in the future. Whats next?! ‘Azeroth Zoo Keepers’?! ( A show where Blizzard staff try to breed a new form of animal IRL and add it to the game) or even better, how about ‘Azerothian Cupcakes’ ( A show where Blizzard staff design their own faction related cupcakes, the winning faction gets customized mana food for mages and food buff tables for the tier.)

I decided to create a piece of Machinimation, a parody based on Azeroth Choppers. I think the result is almost as good, if not better than the real thing. Enjoy! 🙂

If you have enjoyed this article or have YOUR OWN ideas for the next big Blizzard waste of… I mean.. Contest, drop by our forums and drop us a line!