Alright, so we just received the 5th build of the public test and I felt it was time to update the previous prediction articles I have made, as well as conclude on whats happening so far.

Two weeks ago they announced the Beta phase would begin, and since there have been literally thousands of people testing around the clock. Prior to this, there was only 1 dungeon, and one zone testable. The dungeon was Bloodmaul Slag Mines, and the zone was the Horde-only Frostfire Ridge.

There have been hundreds of balance changes and tweaks, and Warriors even got a new 45 tier of talents across the board!

Ashran, while still not open, continues to get work put into it.

Meanwhile, PVP is fully testable with the addition of the important level 100 realm. There are also PVE alternatives for players out in Shattrath City (the old version) via internal test dummies equipped in all varieties.

In the most recent build, they have added two conspicuous NPCs. One sells Draenor Enchants, flasks and potions. The other, even more mysteriously, offers to teleport you to dungeons… Let’s keep these features in mind!

While each subsequent build’s release adds a lot of new graphical components and class changes, there really hasn’t been that one big announcement yet. You know, the one to set your clock to? So let’s talk about where they can go from here! 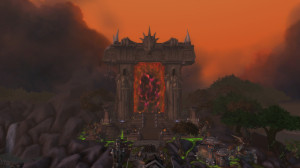 Besides making this even cooler looking!

So I have speculated on this already, and will do so even more right now. With the addition of the consumables vendor, and the dungeon portal vendor, this solidifies to me that they are going to begin testing Heroic and Challenge mode dungeons soon. It may not be this week, but it is much closer then anyone realizes.

This is solidified in my eyes by these two NPCs for a respective reason that should seem obvious once you realize it. Currently, you can do all these normal max level dungeons and test your heart out, but Normal modes aren’t really a challenge. They can easily be done in the max level pvp gear players have, especially with no flasks or enchants. They aren’t meant to be a challenge! So why would they add Flasks and potions, especially since the only other thing you can test is PVP where neither can be used?

Hmm interesting thought Metro, but whats the deal with this NPC that ports you to the dungeons? Why would we need that? You can actually queue for the dungeon you wish to do now right? I mean, even if they add more what downfall is there from queuing? Unless of course… OH!

So hopefully it makes sense to you guys as well, but to me it screams transparency. The vendor will allow you to enchant your gear and fully prepare your character for difficult content starting with Heroic 5 mans, then eventually Challenge Modes and raiding. The queue NPC will allow you to get there, as otherwise you couldn’t enter a Challenge Mode. It will also help in this regard if you should have issues with the queue system in LFG’s present iteration. There seems to be an issue with backfill, so once some one leaves, you can’t gain a replacement no matter how long you wait. Now, you can port out, find replacements, and have them teleport to your dungeon group. Even more important is that this allows them to fully test dungeons in zones that aren’t ready yet.

Regardless, there are only 5 more dungeons to be tested on “normal” mode so its not like we have years ahead of us. One of them is actually already been implemented, but removed due to incompletion nearly as swiftly as it was put in. Honestly, I wouldn’t be surprised if they allowed us to test Bloodmaul Slag Mines on Heroic before they let us test some of the other stuff. I imagine when they make the dungeons they have a team working on all versions, so its very likely that one that has been out since the Alpha is ready for all three difficulties.

More importantly is our ability to progress faster through this beta because of the 100 servers and new technology. Originally, I found the 100 server to be paramount to Challenge Mode testing, and I hope it still is, but since they have included scaling UP as well as scaling down, even level 92s can test the level 100 content. Not sure why you would want to, as you can’t actually choose a level 100 talent but…

So ya, I stand by my previous statement in saying that the implementation of level 100 servers cuts the beta test window in half. Every doomsayer out there with 0 attack and 7 health spouting that this game wont be out until May 7120 should feel a cold sweat drop down their brow. Especially with as many raid bosses and difficulties as there are, this really expedites the process. Once they get into 5 man heroic testing, it should seem obvious.

Up until now, they have only tested stuff that can be approached casually, at least in terms of PVE. With the addition of vendors to give a full set of any enchants, portions, and flasks in the game they are setting people up with the tools they need to begin theorycrafting for actual difficult content.

As a late addition, browse through this thread.
http://us.battle.net/wow/en/forum/topic/13421662064
Even Rygarius gives some subtle hinting that “this is an advanced heads up” in order to prepare for when they are implemented. And we all know that when addons are implemented, its very likely difficult content will be as well!

So if a sane person were to look at all this, and think addons + difficult content is on the horizon, he may also hazzard a guess as to when that might be. Let’s say two Tuesdays from now. So July 22nd!

That is my guess and you can take that to the bank. With Naxx in hearthstone also on the rise, we are certainly in some exciting times.