Let’s get right to it boys and girls. Some very strange tactics Blizzard is employing recently, and its time to discuss it. When Blizzard gives something free away, you know they mean business!

Otherwise unheard of in the World of Warcraft universe, Blizzard must have been spending time around Twitch, because they decided to do a random giveaway of Mists of Pandaria to accounts that aren’t currently subscribed.

Honestly, this is the smartest thing they have EVER done. So many people quit this game in cold blood and for the dumbest of reasons, so how better to warm their spirits? Free stuff! Although honestly, its timing is all part of the plan from Blizzard, as people coming back now of this mindset will likely have a few months to try MoP and then either abandon the game again, or be sucked in and by WoD.

The stranger part is figuring out if it was legitimately “random” or not. The way I look at it is, they probably had some feedback and statistics that these players were good targets, and they just spun it off as random. I probably am thinking WAY too much into it, but that’s the way I like it!

I mean, think about it. You aren’t just gonna pick some random 13 year old kid’s account who can’t even subscribe and buy the game himself anyway. You are going to pick 18+ people who quit and cited a sensible reason when they went. Its gotta be people who left for fair reasons, and not: “Other: Pandas suck.”

Well either way, if you don’t have Pandaria by now you aren’t the stand up citizen of the wow community. The only example I know of this was our previous GM Dioxx, who joined the military at the end of Dragon Soul and went to Korea for the entirety of Pandaria. He did actually end up purchasing the expansion around Christmas last year, but realistically, hasn’t played it since. Examples like this would have been a great target to reward, but we shall never know likely.

Anyway, check out the image you would have received in an email if you were selected: 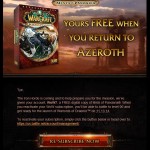 How do these people get this job!

Now I told you that to tell you this. The expansion sweepstakes was part of what Blizzard believes to be their master plan and rebirth. Its obvious to me after reading and hearing all these interviews with Tom Chilton this weekend. They sound primed and very confident about their new abilities, and despite WoD being a road block for them, they are apparently ALREADY planning the next expansion…

Seems extremely over zealous to me, and I’d go as far as to say the have abandoned making this one the best it can be, but of course you wouldn’t hear that out of their mounts. The fact that Celest confirmed proving grounds aren’t getting a new home confirms it for me.

.@Demonflavor @WatcherDev Proving Grounds plan: Will still be in the Tiger Temple for now, but with new achievements for level 100.

Things like this really get on my nerves frankly. It was an amazing feature in MoP and they are meant to be even more important in WoD, meanwhile people still have to go back to Pandaria to do them with the same dopey AI and creatures. Its just a huge cop out which is clearly a product of how big MoP -> WoD really was. And that’s fine, but it just stings to see so many great features come in with WoD and just sit there like second class citizens. This better not happen with Brawler’s Guild!

But anyway, the real meat and potatoes comes in this single quote.

“I am 100% sure we will do some new races at some point, in some other expansion that is coming up.“

This is a quote about something that should be SO far off the charts at this point its just silly, but instead Tom makes it center stage news. One hundred percent sure. So that means, in my eyes, that he is that sure because its already begun happening. They are already working on a new race, meanwhile this expansion has Proving Grounds in Pandaria and no scenarios.

Their “plan” seems to be centric to this 1 expansion per year thing, and they have already made a declaration like that in MoP and failed MISERABLY. Beyond miserably. A single patch was longer then the entire expansion was meant to be!

What it says to me is that the higher ups and owners of the company want more expansions, and the team is struggling to adapt. Its probably what caused Rob Pardo to leave, and likely isn’t helping anything about any situation. If it happened smoothly, it would be great, but let’s face the facts people. It never will. Ever.

Playing a new expansion every year is just stupid for new customers as well. Only 4 more expansions to buy before I can level from 1-150! WOOW.

Maybe if they give more free expansions out! I’m sure we will find out all we need to know at Blizzcon. Should be interesting.

Warlords of Draenor, Through The Dark Portal

Is ‘Azeroth Choppers’ a Waste of time?