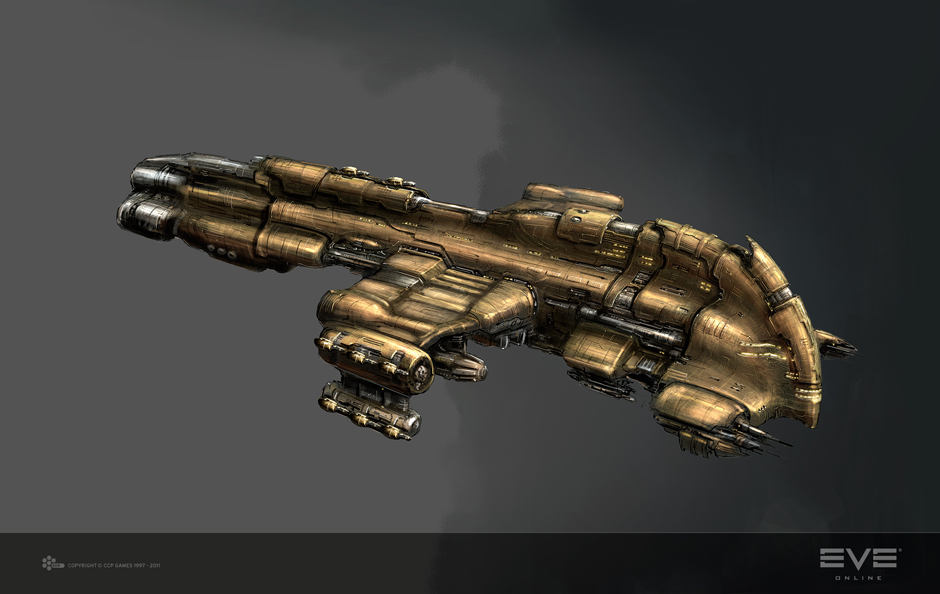 For mission running, the Harbinger is an excellent choice for up to level 3 missions, while it also can serve a role in both PVP and site running (anomalies, wormholes etc).

Due to the slot layout (8/4/6), most people use this as an armor tanking ship, while some fits actually chose a shield tank. The Harbinger has no bonus to resists, and so there are no incentives to using armor tanking over shield tanking but is focused on damage application with bonuses to reduction in laser capacity use and a laser damage increase bonus as well as having a small drone bay.

There are no bonuses to a specific size of laser, but due to powergrid it is impossible to fit Large Lasers and quite common to fit either meta 4 or tech 2 medium lasers depending on skills, capacitor or powergrid issues. As always, its usually a bad idea to mix and match weapons, as it makes it harder due to micromanagement issues to be effective in combat.

Since the Harbinger has a 50m3 drone bay and 50Mbit Bandwith, you can chose to bring 2 flights of light/scout drones, or a specialized flight of mediums to help you in your role. For PVE, I’d reccomend light drones as they do help in taking down scramming frigates (possibly saving your ship). Of course a good idea to complement the drones are to train up for tech 2 versions as you get a better effeciency from the prerequisite skillset.

To increase DPS potential, the harbinger can use heat sink modules to great success, but with a long range fit you may want to consider tracking modules instead. With 6 lowslots there is ample room to fit at least 2 damage mods as well as armor tank; keep in mind though that diminishing returns if you do decide on a shield tank (frees up room for more gank mods).

More so than the other races; Its important to also train fitting skills, especially due to the lasers capacitor needs.

On battlecruisers you should always fit at least a tech 2 tank, so even if you chose the shield tanking version – be sure to fit tech 2 version hardners/extenders.

Due to the slot layout though, the most common fit is the armor tank (active tanking).

For PVP, mobility is key while for Incursions the buffer is key, so plugging resistance holes becomes more important than being able to move fast as you’ll have Logi on-grid with you.

The vanilla fit for PVE missions would simply be 2-3 mission specific armor harderners, and a medium armor repair module. Depending on skills and preferences, you could use rig slots for more armor buffer, or gank modules or an EANM to round out resists for more security during missions (downside is longer mission running time).

Don’t forget that missioning means keeping a sustainable tank, so if you go with the armor tank you’ll likely need capacitor rechargers in addition to the armor repair module as both the self repair tank and the damage modules require capacitor. You’ll need your mission fit to be stable. Its more important with the Amarr ships that armor tank than the other battlecruisers that tend to shield tank.

The AB can be quite handy in missions, but for null-sec or pvp the MWD is mandatory. Provided that you deploy the armor tank, you can use the midslots for utility tackle as well.

Personally, I preferred the kiting Harbinger for missioning while I had deployed scout drones to deal with annoying frigates. Tanking missions was easy, with plenty of low slots to fit the armor tank it allowed me plenty of leniancy to overtank and then when I felt confident – to cut back on tank, and up for the DPS.

Damage would be close range, so tracking may become nessisary to fit modules for. Getting in close can be hard as the ship is slow, but with a vanilla nano/shield fit this is possible. Downside is that when facing faster ships, it become hard to dictate range as well as applying damage.

Alien escapepod touches down near Iceland