Player Owned Starbases; Issues as of Spring 2013 with Cipreh

CCP decided to take up the discussion about POS’es in an effort to identify and talk improvements at last Fan Fest. In the interrim, alot of things happened – one of them that CCP found out that it was a big thing to start work on and that the initial roadmap was likely being changed.

The reason there’s a “no” to doing [Modular POSes] right now is that it was affecting all of these areas in a way that was too big to do at once. What you’re trying to do is try to find a way to get what you want, but what we need to do is go back and look at how we can separate all these layers, and figure out something reasonable, and then have Art do something that’s immersive and amazing. (Source: CSM Summit Minutes Winter 2012)

Cipreh expressed a desire in identifying and highligting the issues that players are facing on a daily basis, so this feature is co-written by him. Without his valuable knowledge, this feature would not have been possible. Since we started work on this feature, CCP released a new developer blog about POS changes coming up in the next expansion for the game; Odyssey.

The primary public issue with the current iteration of the player owned starbase system is access security inside starbase structures, primarily Ship Maintenance Arrays (commonly known as an SMA). SMA’s are structures which players can use to store ships, as such players who choose to live out of towers are required to interact with them on a regular basis. Control of all structures within them and starbases themselves is based on one of four levels of access, consisting of all alliance access, all corporation access, members with the starbase fuel technician role, and members who have the configure starbase systems roles. These are usually broken down into recruit (corporation level), member (starbase fuel tech) or director level (starbase config sys) access. Since each additional level of the access includes access to the level below it; this limits the security for the members at a lower level of access compared to those at the top levels. In addition, this allows anyone with the required level of access to access those structures in any tower owned by the same corporation if they are configured in such a manner. 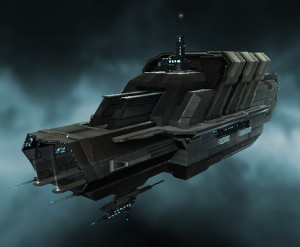 Due to the lack of segregation, this causes asset security issues that players will attempt to take advantage of by engaging in unintended game play activities.

Players are currently using a workaround to the security issue by placing personal towers, and getting bunkmates to share the forcefield passwords with, which would indicate that the number of towers in use are artificially inflated due to a design flaw – especially in places where personal storage space isn’t readily available such as wormhole space. This provides the players with a decreased risk of asset loss, but does not entirely eliminate it.

Most people are familiar with the ship and item hangars in stations throughout “known” space, which is a common way of referring to the combined areas of space consisting of Null, Low or Empire. In these stations, each player has their own ship hangar and storage area, and an unlimited number of players are able to make use of these facilities. This is not the case with starbases and because of this additional security layers must be put in place. The most common of these takes place during the recruitment of new players into an organization. For groups that live out of shared towers the vetting of potential members is the first and best line of defense against theft from within the organization. In-depth background and API checks are par for the course in wormholes, as well as for any other group that works with the POS system on a regular basis. These steps are an unfortunately necessary additional barrier to entry for new players looking to get into well established, player run organizations.

In a corporation where assets are visible to all corpmates, the temptation to steal is going to be there, and where just a few towers are shared among many players, the stored assets in these relatively unsecured hangars can easily grow into hundreds of millions and billions of ISK. It’s painfully obvious that people would want at the very least, a minimal layer of security.

The issue that arises is due to the current design, and the granularity of the corporate roles system, and the levels of access that managing a tower requires. As such, that additional layer of security is virtually non-existent in the current iteration of the POS system. The only work around is the one outlined above, which requires people to get to know and trust those that they choose to share their tower with. Even that option is limited, as someone else within your organization who has been granted the specified roles, who has somehow gotten access to your POS password, can easily come in and steal your assets, ships, and modules. This forces people to be paranoid and exclude potential recruits and members from their organizations, and promotes the formation of cliques within the larger organizations, which is generally unhealthy for the growth and prosperity of the corporation, and the people within it.

Issues with Industry in POS’es

Another issue is with Manufacturing where anyone with the industrial roles can cancel jobs for the entire corp. This opens up for sabotage but also for inexperienced players inadvertedly doing something they were not supposed to be doing.

In addition for running reactions, you have to offline the structures to change the type of reaction you are running, so it requires config starbase roles, which is effectively giving them the power to offline the entire tower, and every other tower in your corp. This means your director(s) effectively have to micromanage reactions on behalf of players, rather then allowing it to be handled securely by one character.

In adition, there should be a risk vs reward factor involved due to the POS’es being destructible. Currently you do gain time bonuses to:

While no bonuses applies to these structures:

Be advised that a great place to look for aditional issues and bugs relating to POS’es is this thread.