On Friday (2/21/2014) we received some pretty big teasers into what will be coming with WoD via the EU/KR press tour’s conclusion. For everyone’s benefit, let’s discuss some of the things we learned as well as how the few new features join together with the band.

The first thing discussed was the item squish and how it affects the character. It was described to be pretty severe, but I’m sure even with this people will still find a way to complain. Here are the numbers mentioned:
Level 91 Protection Warrior had 63k Health.
Common monsters around the level had about 100k healthpools.
White swings as Protection varied from 1-5k hits, with 10k critical strike of Shield Slam being the largest noticed.

With these numbers in mind we can extrapolate a bit from the results given a few assumptions.
Let’s approach it as a 575 non-tank to a 575 tank first.
Standing still, I have 694k Health while a tank would have about 950k in equal gear. We assume this is normal.
Given the footage we have seen, it’s very likely the character being tested was nowhere near 575 ilvl, so we will assume 600k health was the pool the character was standard at pre-squish at level 90. With one level up, and after the squish we arrive at 63k health, meaning 3k increase from 60k roughly for the first level.
Logically, one can then say it is simply 1/10th of everything we see today on live, and that may very well be the case. This would mean I would have 70k health, and our tank would have 95k. This would also very likely mean that our DPS would be doing around 30-35k DPS, and Syiler could expect burst near 100k if lucky.
Furthering the train of thought, if we expect 3k health increase from 90 to 91, an exponential rise after this I find it logical to assume 50k extra health just from leveling, leaving us at around 100k for fresh level 100 toons. Of course, the big issue with MoP was the crazy gear scaling as the tiers came out, so provided that does NOT happen, we may see 100k each tier from gear, leaving us around 400k when the expansion ends.
The same extrapolation can be made for DPS, assuming 100k to be the norm for fresh 100, and 200-300k being towards the end. It’s important to note this is hardly different at all, and IN MY OPINION does not merit being called a “squish.” But it’s all speculation at this point… let’s move on.

The next thing we learned is the differences don’t just persist in actual stats, but also in questing. It was described to us that 579k XP was needed to go from 90 to 91and 640k to then get to 92. A third point of datum would be needed to extrapolate the exponential curve for EXP, but we can make a non-scientific guess just assuming the difference expands by half its previous each time as it approximately did in MoP. With that, we have the following curve. 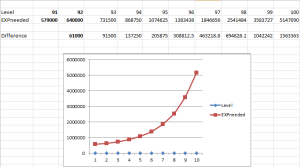 While this makes sense, it’s quite obvious that once again the numbers are getting out of control and barely different than MoP, especially considering the 10 level gap instead. Either way, still dealing in speculation purely, especially without a third point of datum, so it’s best to move on to less subjective matters.

The term “bonus objective” was hinted at before at Blizzcon and is now officially discussed, and described as:
New objectives might randomly appear in your quest list. Completing the objectives will reward you with extra experience.
This is a pretty foreign concept for WoW, especially with how much effort they put into the quest system, but shades of its theory can be see with the Champions of Pandaria rare mobs that gave as much exp as a Quest did and were hit-or-miss to find. This will likely be the same concept, this time just random world events akin to Rift or even the concept we have seen in Wildstar. Regardless, things like this really break up the questing monotony and make the zones feel alive. Here’s hoping it comes with a crisp interface so you know exactly when or where, and is more than just randomly generated NPCs. Would be amazing if it was a part of the zone!

This isn’t the SMV you remember from TBC! It’s quite the opposite really, being described as containing “lush green plains lit by the moonlight.” That quote alone makes me want to have a lucid dream, not sure about you guys…

Anyway, the mobs in the zone seem to be quite invigorated as well, and while I don’t have images of each, it’s been said that the typical BC roaming mobs were updated to look even better and more buttery/majestic. The main ones that seem to have people’s attention include the Talbuk and Sporebat models!

In terms of architecture, we learned that the zone will have Draenei Cities, Naaru areas, Iron Horde strongholds, and obviously “Black Temple.” The zone is filled with rich colors and forests, and as we have seen in the screenshots from Blizzcon, perpetual moonlight blankets it all. Should be really interesting to see finished!

Vegetation was also discussed, along with a new visual implementation that makes the grass sway and be depressed as we walk through it. There is always one awesome change we see in the visuals each expansion and this one does not disappoint. This furthers my belief that WoW’s graphics are really impressive working with a 10 year old infrastructure.

In terms of lore of the zone, Ner’zhul is the primary antagonist, and Maraad, Velen, and other characters are your protagonists. As Jade Forest did before it, this zone contains a HUGE ending that really gets the expansion underway, and really makes me worried for my character going into it. This is a MASSIVE spoiler, so I won’t include it in the article, but either way it’s certainly taken a turn for the dramatic even after the first zone.

The final point to bring up is the most important to the expansion. The zone feels entirely different, looks entirely different, and has entirely different lore than previous SMV. For some reason (likely retard) people continue to say that this is just a re-used expansion and nothing will change. From what we have seen today, it’s pretty obvious that this is the furthest thing from truth, and many testers have described the zone as “entirely new” and “doesn’t give you a feeling of deju vu.”
This is REALLY good to hear, because if the zones were too similar it would be pretty immersion breaking for me. I have no doubt Blizzard knows what they are doing, but understand that if this isn’t done the best it can be it completely defeats the purpose.

So far, everything I have seen is amazing. Can’t wait to see even more.