What a better time than Easter to talk about Battle Rez changes! Hope you all enjoyed your holiday, because the people at Blizzard were hard at work furthering the news dissemination that has been happening since Alpha’s notice.

Today, the aim is to first explain the Warlord’s Battle rez model, and then give my opinions on it and help give examples of fights today that this could be amazing or horrible for.

So for those of you who haven’t heard, with nearly all difficulties being flexible, (and Mythic being uncharted waters in general) we now will be operating under a new model that can be 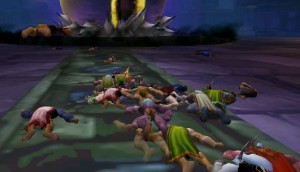 quite difficult to understand, but once implemented should really help things along. The current model has evolved along quite a patch. In the old days of Classic, there was no cap on rez in combat, but only Druids could perform the action. Soulstone was merely wipe protection, but if some one did take one in combat that of course didn’t effect anything either. So realistically, if you have 40 druids or locks, you could have two shots at the boss per player on average, if not more. This was a fact on some of the more difficult encounters Classic offered, forcing guilds to level alts then get soul stones to them before pulls in order to facilitate progression.

Fast forward to the present day, and we see a much different model. A well planed “1 per 10, 3 per 25.” This was quite fair considering how many more mechanics happen in 25 man, but the true upgrade was giving Locks and DKs an option to rez as well! On top of this, Holy Paladin with Symbiosis could also find themselves with a Battle Rez. This took the guess work out of the equation, but often lead to things like every player in the raid using their rez at the same time on the same person who is afk, and now they are all on CD! This will all become a thing of the past in Warlords of Draenor, however!

The new model will take a bit of getting used to, but let’s explain it in basic terms.

First of all, this is only applicable to raid encounters, so elsewhere I’d imagine the old rules still apply.
So during an encounter, anyone with the capacity for a battle rez will have a new raid-“wide charge” pool that changes over time. When the boss is first pulled, there is only one charge, so no matter who attempts to rez some one, it can only be done one time off the bat. This charge pool will accumulate another or refresh itself over a fixed interval derived using the following equation:
1 charge per 90/X, where 90 is an arbitrary formulation and X = RAID SIZE. So let’s explore real possibilities before we delve into the other features.

10 man (lowest difficulty)  – 90/10 = 9, thus 1 charge every 9 minutes. Effectively, one charge per encounter, as a 10+ minute fight will nearly never exist outside of Mythic.
14 man (common flex size) – 90/14 = 6.4, thus 1 charge every 6 and a half minutes. Effectively, one charge early, and one charge at the very end on some encounters, but likely just 1 per on most lower difficulties.
20 man (mythic, end game difficulty) – 90/20 = 4.5, thus 1 charge every 4.5 minutes. Effectively, one charge early, and at least one more in the middle of the encounter. Depending on how encounters go, there is a real possibility of a third rez used towards the end, as the 9 minute mark approaches. This makes sense, as Mythic will be the hardest difficulty, and likely have 10+ minute encounters like we see now.
40 man (potential top end for flex, unlikely) – 90/40= 2.25, thus 1 charge ever 2.25 minutes. This is where things get pretty silly, as if they do actually allow for 40 man flex, having a rez every 2 minutes is disproportionate to the previous trend for that many players. Its likely 5+ players will die every encounter, if not 10, so only having 3-4 rezes is just too few. Unlikely to see 40 man as a potential option return though either way.

OK, so now let’s examine the second half of this change and how it will effect the raid!
The UI for this will be much more intuitive, as hinted at earlier. Since they all share a CD and pool of charges, everyone will see the charge spent only if the player takes the rez successfully. This means those silly DC battle rezzes won’t happen, and if it some one dies, gets a rez but doesn’t take it, you can simply use it again on the next death. On top of this, there will be a debuff on players that have a pending resurrect. This alleviates the issue that happens now summed up as: I DID REZ HIM DUDE HE JUST ISN’T TAKING IT.
Now there will be no grey area! Only thing that needs to be done now is remove the runic power requirement on Raise Ally, and we will be in heavenmode.

So anyway, let’s discuss how this can immediately be amazing and its opposite based on SoO. Of course, fights are likely getting a huge overhaul given 20 man and the healing changes, so don’t take this too far. Its only really relevant as a showcase, and not as a prediction.

Best case scenario: Paragons 25 man Heroic – 12 minute enrage that has the potential to extend. Typically, a player may die early to something silly, but since its such a long fight, there is potential for 3 resurrections used easily.

Worst case scenario: Norushen 25 man Heroic – The only time players ever die in this fight is right after the first 5-6 adds spawn from those returning from the trial. If you are going to use three resurrections, they will all be within the first minute, but now they can not be.

These are just two examples of how this can effect us, but in short its obvious that this benefits a longer fight time. If the fights are less than 5 minutes as there were in ICC, then expect only 1 rez to be used effectively. Only time can tell how this will play out, but I immediately like this concept much better than the previous. If you guys have any questions or want to discuss your thoughts on this change, we encourage you to head over to the forums at https://wordpress.ravenant.com/community/

See you in the next article!

What in the World of Warcraft: how the movie will handle expansions of the world