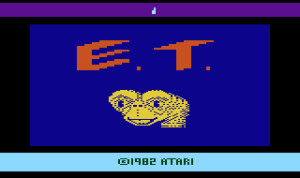 [/NoImgStyle]They sifted through the mounds of dirt and trash, digging through the debris of decades. At one point, the heavy equipment stops and men scurry into the fray with shovels, then hand trowels. There is a sense of anticipation from the 200 gathered people, a buzz of excitement. Then, after hours of digging and more than 30 years of speculative debate, a hollar from the dirt, “We found it!”

Gamers rejoice! The purported worst video game ever has been found in a New Mexico landfill: the 1982 Atari bomb, E.T.: The Extraterrestrial.

With the worst reviews and sales of any game produced by then power-house Atari, the rumors flew that in their embarrassment, the company trashed “millions of cartridges” programmed with the game. The game itself had been so poorly received by players: a total of 5 million cartridges were produced, however 3.5 million were returned to Atari by retailers! Add to this the millions of unsold cartridges for other games (notably the Pac-Man game produced by Atari that also flopped), the company found itself with losses in the billions, and product they had to dispose of.

In 1983, the New York Times (along with other news outlets) reported that Atari was dumping “…truckloads of discarded game cartridges…” in a city landfill found in Alamogordo, New Mexico. However tight security kept the press and public from seeing what was actually being dumped while concrete was poured over the site. With all the secrecy, of course being in New Mexico, conspiracy theories flew that the flailing company wanted to hide its biggest bomb – E.T.

Fast forward 30 years. A Canadian based film company, Fuel Entertainment along with Microsoft’s X-Box Entertainment Studios, applied to the Alamogordo’s City Commission to clear the air and excavate the Atari landfill site in a bid to produce a documentary. The deal got approved with the dig scheduled for April 26, 2014. With main-stream gaming outlets announcing the event, invitations were sent to the press as well as the public to become part of “gamer history” – to uncover the truth behind this “ultimate urban legend”. 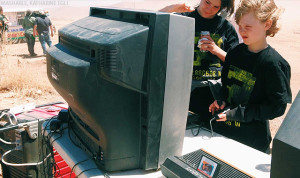 The dig produced not millions of E.T. cartridges – only 2,600 were found – but it did settle the long standing questions of just what Atari had buried in the desert of New Mexico. Along with the E.T. game were found Pac-Man, Centipede and other game cartridges and books, broken up consoles, joy-sticks and other electronic bits and pieces. People set up their own consoles and tested some of the cartridges, which amazingly do still work! A quick check on Ebay shows a spike in the prices of Atari 2600 systems and games with the E.T. game itself being bid up to $74.00 (US)!

As a gamer, yes, I had the joy of owning this game back in 1983. I remember we bought the game at Sears for $2.00 (US) and we thought it was a steal – most games were going for $14.00 then. The cashier looked at us kids and shrugged his shoulders, saying if we wanted to wait, they’d be throwing the game away soon (it just wasn’t cost-effective to send things back to the mainland from Hawaii). We couldn’t wait, the game was a present for my sister who happened to be a huge E.T. fan. I will admit to not liking it very much, no one in the family really did – we were ever addicted to Pit-Fall and Donkey Kong.

Here’s a “quick” video showing the game play itself. For those of you who had the thrill of playing this in the early 1980’s… enjoy the flashback. You can discuss this and other “bad vintage games” here in this thread.

The Syndicate Celebrates 18 Years of Glory

Firefall Beta, Playing in the Sandbox