The strangest thing whilst exploring the files within the Warlords of Draenor alpha patch files was by no means the topic that presents itself today, yet is equally more interesting in the possible connotations it provides for the future or World of Warcraft. 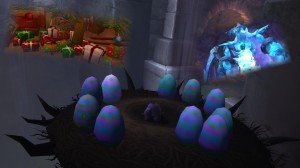 Fundamentally, immersion is a key aspect of what makes WoW different from other MMORPG’s out there, with it’s rich lore and plots for each expansion rivalling even the best fantasy novels out there, but the limitations of the games set pieces, painted the same colours since 2005, are obviously an issue for full immersion. Seasonal events come throughout the year within the game, and the reflection of real life festivities carries through to the game world wonderfully. The addition of winter themed events for ‘Winters Veil’ for example wouldn’t be the same without the achievements that make you go into Alterac Valley; a place filled with snow, where you would ultimately engage in light hearted festive events and PvP. Places that players frequent in the game are instanced dungeons, home towns and ultimately PvP Arenas and Battlegrounds. It makes perfect sense then, that if you wanted to increase the feeling of that season, those events would be altered in some way to reflect the world outside. We’ve seen it before with ‘Ahune’ the frost lord in coilfang reservoir, and more recently with the Eggs changing to Easter eggs on the ‘Ji-Kun’ encounter within Throne of Thunder whilst Easter / ‘Noblegarden’ takes place. Within the many files of Warlords of Draenor’s expansive Alpha Patches, of which you can access via a download from the official Battle.net site, lies a re-textured map.

‘Arathi Basin’; this popular PvP Battleground has been in the game for many years and is frequented daily by the thousands worldwide who enter it. So what better place to perhaps start the revolutionary step towards more dynamic environments than one of the most visited battlegrounds around. The new textured version of the basin is completely blanketed in snow, from the Stables to the lumber mill; all areas of the once ‘autumnal’ setting are now pure white. It’s not simply a re-paint of the textures, akin to how you would expect, as if someone had imported the Basin into MS Paint and used the fill tool on the green areas with a white bucket of paint, but rather more intricately textured. Many of the trees hold icicles across their branches and the leaves themselves have been powdered by icing sugar, the lakes and rivers around the Basin are frozen solid, allowing then for travel across the once sluggish water areas you would ordinarily swim across. The fact is that this is a very simple art change, with virtually no impact on the battleground itself, other than freezing the lakes and changing the aesthetics of the whole place. The question is do I like it? and without question I think I love it. The fact that this could be a sign of the future excites me to no end, as one thing that remains an issue in World of Warcraft is the ‘samey-ness’ of the same areas you frequent most.

Already the various fan-site and official Blizzard forums are rife with questions on what exactly this map is, and if they have any plans to do anything with it. The general consensus is that people love the idea of seasonal battlegrounds and that it would liven up the same old areas they are used to. Blizzard are yet to confirm anything to do with its actual integration for future iterations of the game, but I believe that this is a good chance to get early feedback on the idea. They did however say that this would NOT be a feature or inclusion in Warlords of Draenor. Ultimately I think that this was done intentionally as it has nothing to do with Warlords of Draenor in the slightest, but allows for almost instantaneous feedback and hype for an idea that they have obviously been toying with for some time. Knowing that of course people world-wide data-mine their products every single patch, to not test the waters with a ‘leak’ of an idea would be foolish, as if the idea was rejected, Blizzard don’t have to commit to anything people have seen in the unreleased and unannounced parts of the alpha files. What a change like this would actually require however, is time, and likely a lot of it, which poses various issues with past involvement in similar ideas and the age old argument of practicality vs. importance.

Practicality is something that has to come into question and ultimately lies the biggest question of them all. Previously Blizzard has put down potential decisions to re-visit older areas of the videogame simply because of time management, with the understanding and reasoning given to the playerbase that if they spent more time on older areas, the likelihood is that it would take longer to add new content, and they would rather add to the game than change it repeatedly. This is likely to be a conscious hurdle for the art team then, especially considering the current effort to re-visit and upgrade all of the older race models, however I would argue that areas of the world we spend the most time in should be exempt from the prevention of re-visiting them, especially considering the dated look of some of the areas. I mean, we are not talking about re-designing how Bloodmyst Isle looks, or any other virtually isolated areas devoid of life, but rather where tens of hundreds of players play the actual game with their friends.

In one simple leak of a file within the WoD alpha this discussion has been sparked, with ultimately the most incredible prospect offered for the future of the game. Consider that many other MMORPG’s are bringing more immersive and powerful tools to the table, despite their inability to come close to the actual content and polished delivery of World of Warcraft, its somewhat likely that the game will need to evolve and accommodate similar methods to keep fresh and exciting.

Whether we will see the development of this area incorporated in the future is anyone’s guess, but I would really hope to see more experiments with this, especially with Orgrimmar and Stormwind. Imagine snowfall in Stormwind… On that thought I leave you with the following video; A full exclusive flyover of the ‘Snow-rathi Basin’ map, with some ‘chilling’ music. Enjoy!