So the bikes appear to be complete, and the show’s finale is rapidly approaching. They have releases recaps of the brief season that was, and have even showed behind the scenes for each team’s process. All the while, we are under the guise that the “voting” we have been doing will be our way of joining the struggle to help get our favorite bike in the game.

I apologize in advance if I sound like a conspirator or come off as condescending, but I believe I have deciphered exactly what this entire series has been. 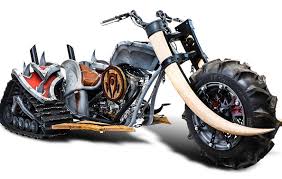 At face value, of course it has been a way for Blizzard to cross promote their product. Regardless of what you think about either the company or Paul Jr. designs, they both have a lot of pull. I can’t speculate how much each party has benefited from… wait actually I can!

Based on what I have seen recently, I assume Paul Jr. approached blizzard, instead of the other way around. I would assume that it was his intent to enter a new reality theme, but couldn’t find potential suitors because of the trend moving away from his style. Of course, Blizzard was happy to accept his request, and after much brainstorming they came to the agreement we have been viewing for 7 weeks now.

I would go as far as to say that this means Paul Jr benefits the least of this, potentially even losing money in order to keep Blizzard on board with this project. Especially considering there is no corporate advertising past the meager effort Youtube make, what was there to gain from Blizzard’s part?

This entire “webseries” has been one giant advertisement for a product they will unveil very shortly. Here comes the prediction, so pay attention!

The final episode will wrap up the show and they will reveal the winner.  But like everything else, this has all been pre-recorded and the winner was never really in our hands. Our vote was for a much different reason!

By issuing a vote, Blizzard has learned what distribution of people prefer which bike, and how many actual people do for both. This may seem arbitrary, it was done for a specific reason.

I presume their intentions will be to implement the least popular bike, and place the remaining on the Blizzard store. By doing this, they have maximized their exposure and profits in multiple ways.

First of all, as mentioned, the ENTIRE series was on giant advertisement for the bike that would be sold on the store. Everyone was getting hyped up over the weeks and engaged in the process, so much so, that when the bike we want doesn’t get implemented, we will of course consider paying just to see it do so. This is as effective as marketing can get, and I am frankly surprised it took me this long to realize it.

Second of all, the vote confirms what we already know. Horde is typically the more fervent populace, so its not surprising that they would win the vote. By making it appear that Alliance voters came through in the clutch for their team, Horde will rally even harder at the concept of seeing the bike implemented. This, once again, is as effective as marketing can get, as everyone from day 1 assumed the Horde bike would win, so when it does not, they will be more implored to make a purchase.

On top of this, its commonly considered that there are more adults on the Horde side, which equates to more likelihood of disposable income, thus increasing sales on this product.

Finally, this concept has generated a ton of publicity and revenue through Youtube as well as potential through Paul Jr. fans and association. I stick by my original idea that Paul is the primary benefactor, but would examine a possibility where they chose his meager fame to help boost what was never about actual success in the first place.

When you examine it from my perspective, you immediately see just how smart the entire thing was. For weeks, everyone said how lame the reality show concept was, and how short each episode was. For weeks, we talked about the “show” to a point that it became ritual. Welcome to marketing 101.

We, the viewers, played right into the hands of the market. It was never about whether the show was well received, or if the bikes were developed in an interesting manner. No, Blizzard did not care about how many views they got on each episode, or whether not the expectations were met by the fans. All they cared about, for as long as this project was conceived, is whether or not they saturated the ears of every able body with the hope of seeing a bike they were even remotely passionate about enter the video game they most certainly were passionate about.

When you advertise in this effective of a fashion you simply can not lose. Its equatable to those who believe the entire NFL season is advertisement for the Super Bowl and its billion dollar per second time slots.

Up until now, I would have simply laughed at this premise, but after not only watching, but being engaged in the very way they intended, makes things very very clear.

To conclude, I will say that this is very clever. It was entertainment, and it was well done. The series was lame at times, but the bikes are incredible to behold. I hope they look as good in game as they do in person, but I state my final prediction right now.

The Alliance bike will be chosen as the winner, and in response to the “overwhelming requests” Horde fans spurt out, the Horde bike will be issued as well, for 25 USD. Maybe even more?
And at the end of the day, it will set record sales for a Blizzard store product, and we will all scratch our heads and wonder why.

Blizzcon 2014 – Tickets Worth Paying For?