One of the new changes to WoD, recently see on the Alpha, is the Role Specific Dungeon Journal change. At this time, I’d like to go on the record again and say that again they are stealing my thunder! They already did when they started doing youtube videos of class guides, but now they are stealing my Healing guide idea! Well, rest assured this wont deter me, but for those looking for a much more basic outline, it can now be found in game!

Let’s examine the change via a few imagines and then discuss exactly whats happening. Once again, these images are courtesy MMO Champion, as we eagerly await our own personal account’s access to the Alpha. 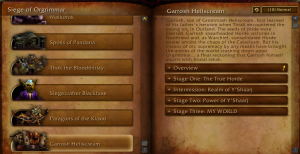 Alright, so this is the way the Dungeon Journal reads as of 5.4.8 on June 6th. Its got all the basics, but of course they are laid out as a raid group, and not for individuals. The big change you will notice in the subsequent imagery is the overview tab, which is the first one featured, being removed entirely. Instead, this overview will exist as a whole new tab, with three individual role-specific markers.

The second image we see indicates what I was just speaking on. The previous installation’s “Overview” portion was copied and pasted into this new tab, and below it are three role specific guidelines. This should, in theory dramatically help players new to the encounter understand everything that needs to happen from their perspective. Of course, this is what I always wanted my Healing Guides to be, but they are MUCH more in-depth than is likely needed for your average flex player, or the like, so its good that they got what they needed as well.

Now we will check out each individual entry and comment on their usefulness and imagine what the future might hold when the new raid’s DJ gets added.

DPS or DD, which do you use?

So the first thing that immediately throws me off is that there is FOUR bulletin points. Are we even talking about the same encounter? I’ve honestly never done this fight as a DPS, but I suppose these are the important things. Realistically, the Touch of Y’shaarj is the most important thing that can be messed up, so if its handled properly then their job can be considered done but there is sooo much more to this encounter! I am excited to see what it might read for the new encounters though, and also what will happen with the Mythic journal. Obviously, Garrosh is much different on Heroic than he is on Normal or Flex at the present moment, so are they taking the time to explain the differences, or are they not going to edit it. To save time, they could easily say “Refer to previous difficulty for basics. New on Mythic is ____”
I feel that would work quite nicely, and would actually be useful for everyone. Regardless, things like aoe rotations on the adds in first phase, as well as group coordination for the transitions is 100 percent vital to the strategy, so if this is where all it were to say for Heroic as well, it would be completely useless. Only time will tell though! Let’s keep moving.

After rationalizing through the DPS portion, the tanking one makes a lot more sense to me now. While there are a LOT of nuances in this encounter, they are all individual strategy elements and implementation, so thus the basic strategy is of course this. If you were to understand nothing else, these three points would be enough to recognize the fight’s purpose. But of course, this is far too little to go on, even in lower difficulties. Things like boss positioning, how many stacks to taunt off, and who is doing what role in terms of add clean-up, are quite vital to the encounter as well! But those couldn’t be placed there, as you are assuming individuals are reading these, not raids.

All well and good, now that I understand the concept a bit better, but what does the future hold for tanks? They have already confirmed a hundred times that tanks will no longer be getting hit for 100 percent of their health in one global every 4 globals as they do on a lot of encounters now and in the past. Does this mean that there is going to be more mechanically heavy focus for tanks? I wouldn’t mind it honestly, especially mechanics such as Iron Juggernaut, where tanks are meant to run around and soak mechanics as well as actually worrying about the boss. The more I think about it, the more excited I become!

Expecting to see something different still? JK, same basic principle. And I was worried about being out of the market for Healing Guides! Once again, if you understand these things, you understand the damage output, but even in small groups and lower difficulties this is nothing compared to the remainder of the encounter. Most of the damage you incur, especially in Heroic, will be from other sources, and will test your ability as a healer to not only sufficiently use CDs, but use your mana wisely.

This can be said for every encounter, but truth be told, I am glad they are taking the time to do this. I think it will be very healthy for those running pug groups and doing it for the first time, and may even help old veterans like myself get a fresh look at the encounter. The best use for this that I can see is for Beta raid testing! That will be huge, as knowing exactly what each role’s basic job is will help us build a strategy around it. That is one of my favorite things, and I look forward to simultaneously testing the new Dungeon Journal entries and the boss encounters in kind!

That’s everything, so stay tuned for much much more coverage of the WoD Alpha and all the new features that are trickling in!