Finally we have our mousepress keybindings! Its been a long time coming, but with the inclusion of 5 man heroic dungeons as well as the raid testing this week, its a thing of great need.

Now it may not work the way you want it to, but I assure you once you understand what you are doing, it makes perfect sense. Allow me to walk you through exactly how you need to set this addon up. As a non-user myself outside of Beta, it took me a few minutes, but honestly the more I use it, the happier I am! 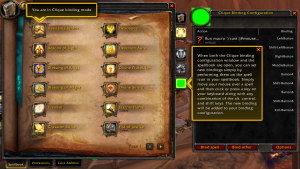 So anyway, that’s what the addon configuration would normally look like, minus the missing textures. Typically, or so I assume, you can bind direct from here by designating a mouse press and then selecting the spell.

In order to make this a reality on the beta, however, we need to do things the gritty way! 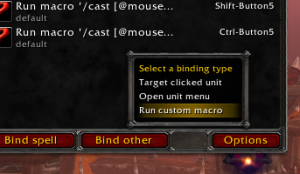 OK, so you have made it to the dark corner of Clique. After speaking with a few self proclaimed experts, this is apparently never used in Live WoW, but is obviously there in case the built in system fails. You see, each time you bind something with a mouse press it makes its own mouseover macro anyway, so instead of it doing it for us this time around, we are forced to take matters into our own hands!

The final image posted shows all you need to know, and honestly if you read the instructions there you should be all set. I’ll explain it more briefly though.

Click the Set Binding Button with whichever combination of mouse presses you wish. Modifiers like Shift + Right Click work very well, so feel free to use them.
Now in the text field, you need to create your own macro.

It needs to be mouse over targeting, as don’t forget, when you click some ones name you are by default mousing over them as well!
Here is an example of one of my spells.

For those really lost, the “macro” is broken down into two main parts.

This part is universal for every spell you wish to bind to keypress. Make sure you have it there, otherwise you will just have to target the players as well. And that’s no fun!
The second part is the actual spell name. You can take the first part, copy + Paste it, and just insert it into every bind you wish for ease of set up.

After you have your spell bound, click save and repeat the process with different binds.

Hopefully that’s a clear enough explanation, but as always if you have any questions feel free to ask!

Oh you are still here? Good, let’s talk about this raid testing coming up on Monday…

So for the record, did I call that or what? Ya ya, I know I did, I don’t need your confirmation.

But there is still a LOT to be done, so let’s not call it prophetic yet. I’m still saying that this means we aren’t that far from a release, and apparently Blizzard employees have been tweeting images of Grom and the Dark Portal, saying things like “it looks strange” etc.

To me, that says 6.0 PTR, but we shall see what this teaser actually is.

Furthermore, Syiler found a tweet from Muffins saying that Brewfest and Hollow’s End will receive updated resources, but described Hollow’s End to have “made the cut” and will be tested in the next beta build. This to me screams that they are anticipating coming out with the expansion around then, but close enough to Hollow’s End that they aren’t worried about Brewfest. It will receive its upgrade the following year, is how I read that, ya know?
I think you do.

So that’s October to November, and it makes complete sense to me. If they can get it out in that time there will be plenty of time for Blizzcon hype as well as maybe even a 6.1 teaser there.

Last thing I want to talk about is the actual raid testing and the people we will have. Firstly, I encourage any players who are on the beta and want to test with Syiler, Meoni, and my Guild to add me at Metrolol#1195. Please don’t add me on Live, my friends list is full. Just hit me up on the beta, and let me know you are a Stratics reader or fan or whatever you wanna call it. There is a high chance we will need you for any raid testing or anything else you want to do. I’m always interested when I’m on, and when I’m not I may be able to be convinced that I should be interested!

Anyway, the raid testing starts this Monday at 430 EST, so expect to see us all together and Syiler hopefully streaming what will likely end up being a horrible, lag-filled crashfest, but MAY result in something worth recording.

If they can manage to push these out over the next two weeks, we may see Mythic, Challenge Mode, and “Normal” (Flex) testing in the coming weeks. That means all they have left to do is get the leveling servers wrapped up and we are ready for launch before September even comes!
Wishful thinking, likely!