This has gotten more and more exciting over the weeks, and now seeing that Blizzard (for the first time) has actually declared they will be livestreaming a “special announcement” at a games convention that isn’t their own…

Well you gotta believe this is gonna be a big deal. How could it not be. 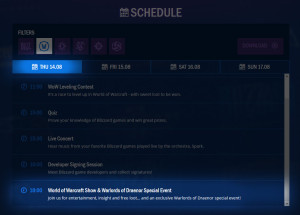 The image and the link above it say it all. A four day game’s convention beginning August 14th, opening with a “Special Event” has never been anything other then major and it lines up PERFECTLY with what I have been hinting and predicting at for a month now. Let’s summarize why, with certainty, this will announce the release date shortly after.

– 4 bosses into Heroic (previously “normal) raid testing with an instant 100 server as well as 90-100 leveling functions.

– Accurately predicted start of Heroic 5 man and raid testing with insights stemming from vendors being placed as well as hints from Blizzard representatives.

– Missing link is 6.0 PTR and patch in general. Sticking by prediction that this coming week will see it’s launch. Mark your calendars!

– By August 14th we should have tested most of Heroic if not all, and will likely see near final class tuning based on frequency of patch note updates.

You might be thinking to yourself, what does France have to do with it? Absolutely nothing. Its just a coincidence.

But ya, so let’s talk about assumptions based on these previous predictions and upcoming facts.

Now to me, it seems all but certain a release date will come and not just any release date. You see, if Blizzard is to follow in their own footsteps, they are very likely releasing this expansion October 14th.

What this guess is based on is the 2 month release date announcement of MoP, Cataclysm, and Wrath. Each time, it has been as close to 2 full months previous, but never on a stage like this. For the first time, Blizzard will not only hype their own game on a world wide stage, but will break the hearts of all the morons clamoring about a “Last day possible” release target. This even gives a wide berth to prepare for Blizzcon – 3 weeks and a few days. Even more so, this aligns with the three weeks it took to receive the 5.1 PTR from launch of MoP. Its extremely likely that 6.1 will be in the works by then as well, so expect something big at Blizzcon!

Think about it logically, if you are still on the fence. Does it make sense for Blizzard to travel all the way to France, a land known historically for extreme crime and poverty – risking their own lives and well fare, just to announce the game is coming out 4 months from then?

Of course, maybe I am wrong and looking way too much in to this. If you are from the future looking back on this, feel free to call me out if I am wrong. But I honestly, have been feeling clairvoyant ever since July Fourth and Rob Pardo’s departure. Everything seems very sketched to plan for Blizzard and I feel I can see their steps before the make them.

Maybe people confuse this sort of “prediction” with a schedule, but upon any close examination you can tell its quite the opposite. If this was planned from the start, we wouldn’t be just hearing about the Gamescom hullabaloo 2 weeks prior to it. They wouldn’t have announced Beta Key giveaways at PAXeast just 1 week before the show, months after they were sold out.

Sure maybe the 2 month prediction is “scheduled.” Maybe now that we are this close to the thing, its easier for them to make timelines to follow. But the point and facts of the matter overall is that Blizzard does NOT operate on a schedule, but DOES have very noticeable habits. Being an observational scientist before all else, it is really resounding to look at any data series involving release timelines and the like.

So go ahead, mark your calendars. Don’t take work off quite yet, but I’m saying with extreme confidence that we see an early October release. The ripple of that means September 16th has to be 6.0 at the latest. It can be as early as August, but they said it will be out for at least a month if not 6-8 weeks prior.

If we assume September 16th, and know it will take at least a full month to test, we have to see the PTR this coming week. Realistically it can’t be anything but, especially if they push the 6-8 week thing as an option, unless the ptr cycle is abbreviated.

Back to Gamescom, you should also realize that if for some reason a release date ISN’T looming, it will most certainly feature the WoD opening Cinematic. I’m looking forward to a good one, but after comparing anything to Wrath of the Lich King’s, it is truly hard to compete.

Either way, I don’t envy all those people scuttling around that huge hall. For once, Blizzard is allowing us to take a part of the show from home instead of just read some dissertation about all the events transcribed in half-english.

For once, we will see an official announcement as epic as this one in the proper venue. For those that will be there, they get to see it live in action on the biggest stage. For those at home, we get to experience it together, live, with everyone else. Before I leave you, let’s talk about the announcement and its timezone implications.

From the image displayed, we see it takes place at 1800 live in Cologne, France. For those without a clock imbedded in your brain, that translates to the following:

Boom get hyped. To all the non believers. See ya in Cologne.

The Great Guild Contest VI – ONE Invitational Rules and Clues!