If you haven’t already seen, I would strong urge you to read through this post and watch the associated videos: http://us.battle.net/wow/en/blog/13607366/artcraft-running-of-the-bulls-4-7-2014

Now that we have all read and seen just whats happening, let’s sit down and have a chat, shall we? The reason I need to speak with you this evening is because some of your peers are not understanding exactly what the situation is here. You don’t understand either? Don’t tell me that…

Alright then, let me explain a few things. When you hear people speak about Warlords of Draenor and say things like “glorified patch” or “not worth paying for,” how does that make you feel? I’ll tell you how it makes me feel. It makes me feel like I am speaking to an infant. Some one protected by their in-the-clouds mother and zealous father, blinded past anything their parents feed them about the “good ol’ days.” I feel like I am speaking to someone who is making judgements on something they haven’t played, and comparing its quality to other things they haven’t played, all while making no intention to do so. When I read and hear comments like that, and then I hear and read information like that which we learned today in the Artcraft Blog, I wonder if we are discussing the same video game? I wonder, am I missing something here?

How do you feel about that? You don’t have to answer immediately, but understand this. When you and your friends say things like “WoD is only taking things away, not adding anything,” or “No new race, no new class, no new expansion,” you are really showing your novice and inexperience.

I apologize for the rant, friend, but its high time some one heard my frustrations. 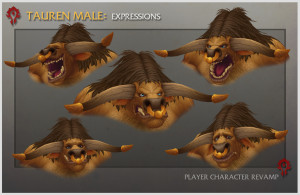 How can ANYONE look at this and then go on to make a comment complaining about no new class or race. This is 100x better than any race ever added to the game, and its just one model! Imagine when we ALL look like this! This alone is the greatest feature of the expansion, but don’t get me started on that topic again! A wise man said “Once you set that monster free, there’s no caging him again.”

Anyway, back on topic! You have seen it, right? You read the blog and saw the video? The one where the Tauren is side by side with the old model, and emoting away at us about lord knows what! Good, you are paying attention then, I’m glad some one is. Don’t you feel like, after seeing that, those people complaining must just have not seen it right? That’s how I feel. When I see my character literally opening their mouths in distaste at something, or heartily laughing away at the joke I just told I can barely contain myself!

I know the expansion is far off, my friend, but its hard for me to sit here and not be excited. These models are just too amazing, and when you put them side-by-side with the previous iterations, its just laughable. Now, I’m not an artist, so I can’t speculate at exactly how many resources this demands against other content, and I know a lot of people don’t qualify that as a proper limiting reagent but…

Ah whatever, let them talk. I’m sick of trying to help people understand what is right in front of them. In the end, we will have living, breathing characters exploring a breathtaking new landscape and conquering new bosses. That’s all the matters.