As of today, the ‘Hearthsteed’ mount is available for use in World of Warcraft; the long awaited mount is awarded to players who have successfully beaten 3 real opponents in either play or ranked modes within the Hearthstone game. If you didn’t realise sooner, Hearthstone recently went into open beta, and as of yesterday had its official release, hence the reward.

To get your very own ‘Hearthsteed’ simply log into Hearthstone (Which is Free to play AND to Download from Battle.net), and join either the ‘casual’ play mode or the ‘ranked’ play mode, both of which allow eligibility for the subsequent reward. When you have beaten three real opponents in either of those two modes, the game gives you the ‘Hearthsteed’ reward in Hearthstone in the form of a pop-up window. Simply log into World of Warcraft after this point to get the ‘HearthStoned’ achievement, and with it mail from mount collector Mei Francis, where you will find enclosed the ‘Hearthsteed’ mount. The mount itself functions as both a flying and ground based mount, meaning players of all levels can make use of it wherever they happen to be. Usual mount training restrictions apply, and the speed of the mount will reflect that of the level of speed skill you purchase from the mount trainer in your local factions city. 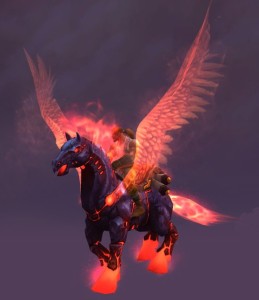 Speculation arose during the beta process, as leaked models surfaced of two horse mounts on the internet, one of them Black and Red, one of them Blue and white. It was confirmed that these models were indeed of the ‘Hearthsteed’ mount, however the original Black and red version did not make the cut, with only the Blue version being available to players around the world. Presumably the original intent was for the mounts to be faction specific, Blue for the Alliance players, Red for the Horde. The change to one mount only is a reflection of feedback from WoW players on the WoW forums, many of which arguing against the inclusion of the Red version for various reasons, many of which seem to be based on suiting the feel of the Hearthstone game. I personally like the red version, however I feel that it was indeed perhaps not in keeping with the Hearthstone look, and the blue and white version would be more sought after based on its colour scheme.

Yesterday saw the release of the patch for United States servers, and today the remainder of the regional server groups for Europe and Asia. This release coincides with other recent additions in the Blizzard line up for March; Diablo 3 is set to get the release of its long awaited expansion ‘reaper of Souls’ on the 23rd of this month. With this, the beta being out for their new IP; Heroes of the Storm and the more recent release of digital pre orders of the normal and digital deluxe Warlords of Draenor WoW expansion, Blizzard are set to set the year alight with it’s various IP sales.

With Beta for Warlords of Draenor hopefully on the horizon soon, be sure to check out WoW.Stratics daily for more news as it becomes available, for everything World of Warcraft related, there’s a place for it here on Stratics.