Player housing is indeed going to happen. For most, it will be instanced so there is not limit to how many houses can be placed. However, there will be a select few physical houses that will be available in Serbule and other places, that will be given as rewards during Kickstart. There is an open area in town with a lake, and this is where they will be located in Serbule. My first thought was that this is where I want mine. But depending on how you like to play, other areas may be more useful. 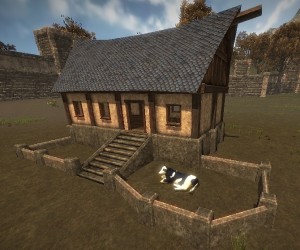 The most central house by the lake is an example of a player house, however there will be several types. Eventually, you will be able to place items in your house, but Citan was unsure as of yet how this will take place. To start, he spoke of a hook system like AC1 has, but he does plan on moving past that to something better later on. Most certainly, houses will have the ability to hold crafting stations. I asked about gardening in the yard, and he said it was possible, but he hadn’t really thought about it. There would be issues, but he didn’t think it was something that couldn’t be worked out, if thats what we wanted.

There is also the possibility of creating the craft of painting, with a primitive Paint GUI, so folks can have or sell custom paintings for their house. 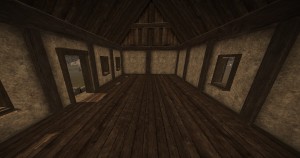 The main idea here is to have stalls in each town where players can rent vendors to sell items while they are offline. There would only be a set number of stalls and there would be a system in place so that the same players could not control player market.

These vendors will also be available to those who get a physical house through Kickstarter, to be placed at their house, making the value of having a physical house even higher. Imagine having a house in Kur that sold supplies for fighting in that area. That could be as profitable has having one in town.

Ideas are still being hammered out concerning housing for cursed characters. Spider has an ability that allows it to appear as a person for a short period of time to deal with NPCs that don’t like animals. So far spider is the only one that has this. That may change, or perhaps some other device may help in that area. There will be a barn type house available, however Citan is of the thinking that most players do not have a cursed character as their only character.

There will be a new NPC outside of Serbule. He looks a little shady though, so be careful.

Also, look for some new landscape in Serbule. Large mushrooms will indicate where the myconian cave dwells. There will also be a new body part on the horizon…..eek!…as well as some additional fluff in the form of carts, ruins and such.

Mundane issues include bug fixes and some crafting annoyances dealt with, like the fact that some recipes steal your empty bottles. Work is being done to make quests and locales more interesting.

I am betting you would rather hear about something you didn’t already know, am I right? Ok, here goes. Two more land areas are in the works, one of which should be implemented in 6 to 8 weeks, if not sooner. This will be a forested area populated by Treants and fairies. The fae race will be an advanced player race unlocked through a questline. Becoming a druid will also be possible here, but like lycanthrope, the power will come at great cost. Animal taming and animal husbandry will also become available here.

It’s all about me.

Here are some tidbits that have been on my personal wish list for over a year. We will soon be able to sit in chairs. At first it will be by a simple mechanic that can then be worked on for a later date. Click the chair and you magically become sitting on the chair. At some later time, animations can be made to upgrade the experience.

And now for some cow love. There is work being done on a cow model that will have the capability to be everything we want a cow to be. At first, it will be the ability to give cow skills appropriate animations. This model, however, lays the groundwork for custom emotes, cow/human animations, custom armor and dances. Similar work is also being done for werewolves, but deer, pigs and spiders are down the road.

There is talk of live events and player ran events. If you have any ideas, please post them here!

Project: Gorgon to Kickstart in July!