Project: Gorgon to Kickstart in July!

What is Project: Gorgon?

The developers are of Asheron’s Call ilk, and it shows. When they introduced magic orbs the other day it forced me to remember those days of taking ten minutes of buffing before entering a dungeon. It is not Eric and Sandra’s intent to recreate AC. But this is the type of game they enjoy, and has been lost in gaming in recent years.

Project: Gorgon has rich background history and culture, which includes many races, some of which are, or will be playable races. Races have profound tendencies that come out strongly in the behavior and speech of the NPCs. As the player progresses he will pick up bits of lore that will help him later. He will travel from one land to another, until all the pieces fall together.

And yet, Project: Gorgon is not a story driven game. There is much to do that have nothing to do with, well…anything. There is no limit to how many skills you can learn. Beyond combat skills, there is crafting, and skills that supplement combat. You can learn Art History, and yes there is a reason to do so. There are no Classes in the way that we have come to understand in the gaming world. You can pick and choose what might be more useful for the given situation. This is especially useful in group hunting.

It is our goal to create an environment that encourages personal creativity in a group setting. While there is no limit to the amount of skills a player can learn, specialization is encouraged. Through vendors and live events, an economy controled by the players will add to the immersion of the game experience. Crafters who don’t have the time to gather ingredients can rely on newer players, who in turn can earn a little extra coin. Others who hate crafting can farm special loot to make available to other players. Incentives will be available for those who embrace the idea of a community where players build each other up. Role play is also encouraged.

I should mention the curses. Or maybe not. 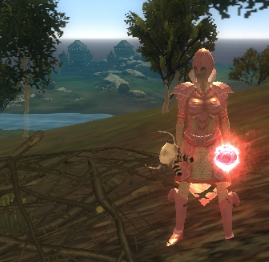 Live events will be a regular thing, when possible. Mods and Helpers will be around to help new players. Animal Taming and Player Housing is in the works. We are very close to having mounts. The GUI is in the process of being totally revamped. And for the first time since inception, there is real discussion of PvP dedicated areas, possibly in the form of arenas or game maps. And if you have looked at this game before, expect to see lots more land mass and polish. I think you will be pleased.

No waiting to be selected, just download the client to your PC or Mac, or play in your browser. You can be directly involved in the progress of this game, and in the timing that features take place. The devs need you and want your input, frequently asking us questions and showing up at events.

July 2014, as in next month, is the target for Kickstarting and we are right on schedule. Donation incentives include many cool things including housing perks that will never be available again. Helpers and Moderators, as well as seasoned Gorgonites will be available to answer your questions, and run live events.