Braum, the Heart of the Freljord

Today is the reveal of the Freljord mountain dweller Braum. From the frozen waste rises Braum as a bottom support tank. The Riot developers made Braum as a support tank so rather than just heal and give back little damage he fully protects the fellow ally and does basic damage. 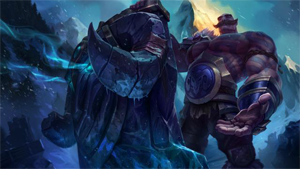 Braums passive is Concussive Blows where Braums basic attacks deal a heavy amount of concussive blows. After his first stack all his allies and his basic attacks give further stacks for concussive blows, When enemy’s sustain four stacks they will be stunned and take magic damage. His main Q which is Winters Bite Propels freezing ice from his shield slowing the enemy and dealing magic damage ,who ever is hit first will add a stack of Concussive Blows. The second ability is his W which is called Stand Behind Me where Braum Leaps between his ally and the enemy granting both magic resistance. Next in line is E called Unbreakable which is when Braum places his shield in the enemy targets direction removing the first attack damage from the shields direction and reduces the damage dealt as long as the shield is up. The last ability is Braums ultimate called Glacial Fissure where he slams his shield into the ground shooting a long-range skill shot that knocks the enemy up dealing damage and slowing them.

Which class to go with Braum?

There is really only one class that would do well with Braum and that would be the ranged classes. The reason it is range is because with Braums Stand Behind Me and Unbreakable it gives the ranged class a good distance away from the melee class’s. Some champions that would fit well with Braum are Ashe, Cailyn, and Ezreal. Ashe is a good combo with Braum because she can slow an enemy down giving Braum time to use Winters Bite, He is also good with Caitlyn Because with Stand Behind Me Braum gives time for Caitlyn to cast the 90 Caliber Net for a quick get away and not to mention her crazy good ultimate Ace in the Hole. Then with Ezreals Mystic shot can help Braum with Concussive Blows and after make it a lot easier to stack with Ezreals Q.

If you ever have to go up against Braum in a match some characters that would go good against him are Zyra, Vayne, and Lulu. Zyra has multiple ability’s to bypass Braums Unbreakable such as Rampant Growth which throws buds as a ward for 30 seconds but when other spells are cast will turn them into plants fighting for her. Vayne has the Tumble ability which has a major cool down and can help evade Braums Winter Bite, Also the ability Condemnwill still throw Braum back even with unbreakable is up. As for Lulu she is able to out position Braums Unbreakable with the help of  Help,Pix which jumps to that enemy dealing damage and then follows them, after that Lulu can use Glitterlance slowing Braum or the marksman.

During big team battles Braum’s Shield will start to gain a shine. When in battles Braum should usually use Stand Behind Me and then Unbreakable to protect his team, and break up a possible ACE. If Braum is ever trapped in the jungle his ultimate is a good life saver being that it will knock the enemy in the sky and deal damage not to mention it will be hard to avoid. Again for big team fights players will want to use Winters Bite slowing down the enemy and possibly making a quick kill.

This is my 2 cents on the new champion Braum. I think he will be a major game changer in any match and especial in the LCS. I believe his W and E will be crazy good in any battle and especial in big team fights being able to break up a good play. Not to mention its the first of his kind to be a bottom tank and taking all the damage that is a big advantage to a good marksman. He also has a Macho menacing look to him and a HUGE shield with a sweet design.

I hope you all enjoyed this in-depth look at the new champion Braum. Don’t forget to follow us on twitter and like are Facebook to stay up on the latest League of Legends news.

Xpecial to be benched for TSM