Welcome everyone, and rejoice! Recently we learned that the WoD Alpha has officially begun, and it was time to show that they were far more prepared than everyone assumed. A whole slew of Patch Notes were released alongside the announcement, and with this we have learned an IMMENSE amount of information about classes, tanking, and features. This article will focus on the ones related to Holy Paladin, but at the end will be a link to the blog where you can see the entire list of changes and their context.

Under the banner of retuning, they have edited some Holy Paladin spells and addressed their useage. With this we see the following:

This is to show clear definition for other class balance, and should come as no real surprise. However, an astute man would notice the lack of Divine Light, as it is indeed missing. That’s because its been completely removed! (RIP)

Many abilities have been removed, infact, and certainly not just Holy Paladins. Last last month, we learned that they meant to take around 15 percent of spells away from each class in order to make the class feel less bloated and easier to play. To this end, we see the following: 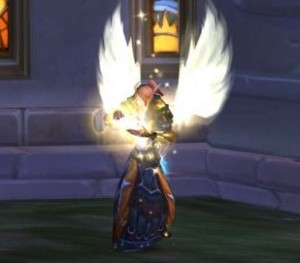 Let’s dissect this one-by-one, and I’ll tell you what I love and what I dread. First off, we see Avenging Wrath and Guardian of Ancient Kings get selective usage; this change, I give 2 major thumbs up. I absolutely hated having three different throughput CDs, and being the only class with more than one just seemed so strange at this point. It took them forever to balance the ones we did have, especially Guardian, so good riddance through and through.
Then we see them take away Devotion Aura, and the tears roll down my cheek. Why? What’s the purpose of making this Tank only? Holy Paladins now have even less utility? That’s the point? So while Resto Shaman seemingly retain Ascendance, Spirit Link, Healing Tide, and Mana Tide, we now have one ability that helps heal, and it only helps us improve our own healing, not even anything past that. With the loss of Devotion Aura, I can honestly say Holy Paladins can’t be anything but the weakest utility healer next patch, and really fear what doing some of SoO with these changes means. Oh well, maybe we will see changes later on!

We next see Divine Light and Divine Plea bight the dust, but its really not that much of a shock. I couldn’t care about eliminating heals, I love that actually, especially for other classes like Priest and Druid. What I don’t like is eliminating Mana CDs from everyone but Resto Shaman. Even Hymn of Hope is gone! Its not my least favorite change, but I really enjoyed planning fights around Divine Plea, and hope this doesn’t mean too many big changes for regen.

The final thing there is Hand of Salvation, and once again, completely despise this change. The reason I do so, is because pretty much in every group where the tank isn’t comfortable or unable to pick up adds, I would taunt of RF them to me to have them avoid killing people by surprise, then Salv them off me when I see him second on threat. Likely unknowingly, they are nerfing a great utility I have as a Holy Paladin. Later on we go on to learn that Forbearance is getting cut in half though, so maybe this will still be feasible if BoP is retuned. Likely not though, and for no real reason. Hand of Salvation is not button bloat, almost no one uses it. No point in taking it out. Horrible change.

Next up we see some PVP changes and stuff, as follows:

Blinding Light being removed is also just stupid. It says to me, oops this spell didn’t work out. Instead of removing stuff like this, let’s put a little more thought into putting them into the game in the first place. I loved the ability, especially in Challenge Modes, and to see it gone is another over simplification of a class that needs more diversity.
The other stuff is all irrelevant to me, and honestly I don’t even know what the previous cast times of those abilities were. If you are using anything but Fist of Justice in PvE you are confused. So ya, cool changes!

Next up, we learn more about the instant-cast spells they have decided to change and tweak:

Now these changes are not something new, and were actually discussed in our previous Podcast on the news from Feb-March. I said it there, and I’ll say it again now… If this goes live as is, Eternal Flame is entirely useless. Light of Dawn was pretty expected, and was somewhat OP for being no-cast, but WoG and EF being cast times are counter productive. They will have to be majorly buffed to be able to compete with any other cast time, especially if the HoT from EF will still continue to not apply the mastery. As of right now, Sacred Shield is looking goooood. Also note, WoG and EF will remain instant for Retribution and Protection Paladins!

The next area we are finding information from is under the title Class Changes, but realistically, its just further clarification for an on-going discussion:

Divine Favor now also increases all of the Paladin’s healing by 100% for its duration.
Denounce’s range has increased to 40 yards (up from 30 yards).
Stay of Execution (the Holy version of Execution Sentence) now deals its healing in a large burst at first, and then decreasing over time (reversed from before).

Eternal Flame now deals 100% of the direct healing of Word of Glory (up from 70%), but only 50% as much periodic healing as before.

So the first thing we see is that Divine Favor will now be a god button. Its still not any different than just using DF and Guardian together as they are now, but at least they merged the two after taking Wings and it away. I welcome this change, and am happy to have less to juggle.
The Denounce range increase is neat, but wholly insignificant. Something that should have been changed in MoP, not as a feature of WoD.
Stay of Execution is likely the largest changed talent, and is now actually useable. Previously, this talent was absolutely garbage for anything but solo healing, but this one small change changes everything. Its now going to be a go-to choice for any fight with high single-target damage.
The EF change listed here also seems pretty irrelevant to me. Nerfing the periodic healing seems even worse, so I am sticking by my statements previous.

Next up, we see Talent choices:

Beacon of Faith (Holy) – Mark a second target as a Beacon, mimicking the effects of Beacon of Light. 60 yd range, Instant, 3 sec cooldown
Beacon of Insight (Holy) – Places a beacon of insight on an ally, increasing their healing recieved from your next direct single-target heal within 1 min by 30%. When consumed, or when the target reaches full health, it moves to the most injured ally within 40 yards. Limit 1. 320 Mana, 40 yd range, Instant, 15 sec cooldown
Saved by the Light (Holy) – When you or your Beacon of Light target drop below 30% health, you instantly grant the injured target a protective shield, absorbing up to 30% of their maximum health for 10 sec. You cannot shield the same person this way twice within 1 min.

These are all pretty interesting, and having two tanks with Beacon seems like a stable choice for most encounters. My favorite so far though is the Saved by the Light option, because I am a player who LOVES to use my ability as a healer to take damage meant for others in their stead. This seems ideal for a few encounters I can think of already, especially Juggernaut while soaking the bombs. Either way, I am really excited about all the 100 talents and can’t wait to make a video showing off their uses and spell effects!

The final part of the info pile is the Perks section:

Enhanced Holy Shock – Your Holy Light and Flash of Light have a 10% chance to cause your next Holy Shock to not trigger a cooldown.

If you aren’t aware, the term “Perk” is designated to the increases you gain while leveling from 90-100. At this moment, we don’t know which come when, but the goal is 100, so all we need to know is that we will have them all eventually. I separated these with some breaks on purpose, as they are clumped into a few difference areas.
The first two are really awesome, especially the Forbearance. 30 seconds down from a minute can be game breaking, and I am really interested in seeing what implications this has in raids. Part of me hopes BoP wont be a major spell like it was in ToT and SoO, but at the same time, I’m happy to welcome more utility after having been stripped of what we thrived on. The DP buff is interesting as well, going from 40 percent magic to 50 percent. This likely means the glyph will become 25 percent of each, but that’s obviously just speculation.

The next set is boring, and pretty much just increases throughput of all your spells except Holy Shock and the spenders. The Beacon increase is nifty though, especially if this means Holy Light will now heal the beacon for 110 percent of its heal. That means its even more pertinent to heal some one other than the beacon, because its quite literally a throughput increase across the board!

The third set is all damage-based, which is kind of cool. I imagine its going to be the same for every other healer though, so we will still be the weakest. I might actually consider leveling as holy this time around, depending on how early you get those perks! Probably not though, tank leveling is just too OP with strong gear out of the gate.

The final string is the most important though, and is a return of something that was in, but reversed. Ten percent isn’t outstanding, but regardless, being able to build twice in two globals with something that actually heals should really help the nerfs to mobility. Looking forward to seeing this all in action.

Anyway, that’s everything for Holy Paladin. Hopefully I didn’t miss anything, but even if I did, there is sooo much info coming out its hard to keep up. If you guys would like to discuss potential more, let me know. Good luck getting into WoD Beta!

If you’d like to read more about other classes and changes, check out the official Blizzard Blog release: http://us.battle.net/wow/en/blog/13423478/warlords-of-draenor%E2%84%A2-alpha-patch-notes-4-3-2014